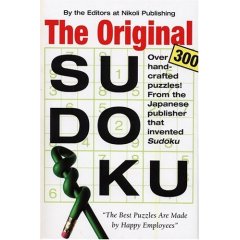 I've joined the Sudoku craze. I'm not an addict, but I'm golly gee darn close to it. And so are my children. Even my 5-year-old attempted a puzzle yesterday.

It all started when we went "home" for Thanksgiving. Dad was doing all the puzzles in the newspaper, as he always does in the morning. And, just like when I was a little girl, I asked if I could help.

I picked up The Original Sudoku at the gas station on the way home. The kids and I worked puzzles throughout our entire 8-hour drive.

If you're not familiar with Sudoku, you can get a glimpse at www.sudoku.com. You can also download a computer version of the puzzles for a free 28-day trial.

Don't try it though unless you're prepared to be hooked. But don't fret, it can be counted toward homeschooling. After all, it's a test in logic.

I still haven't figured it out...even after you showed me how to do it. ;)

Homeschoolicious! Thanks for the endorsement mja!

Bummer C. Next time you're over, let's do some puzzles together. Try the computer version at sudoku.com. That seems to be a tad easier. You can also do the puzzles with L and M. They both enjoy playing Sudoku.