Review: Belisarius: The First Shall Be Last 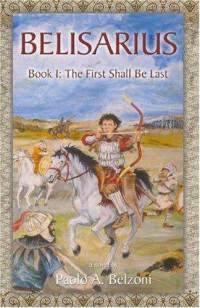 I truly enjoy discovering new authors and new books. I just finished reading Belisarius: The First Shall Be Last by Paolo A. Belzoni (Kindle version). Belisarius is published by the small, yet wonderful, Catholic press Arx Publishing.

In a nutshell, I loved it. This is a great one to read yourself, especially if you like historical fiction. You can also give it to just about any high school student. You could give it to a middle school student as well but please know ahead of time that there are graphic war scenes and it does touch on the fact that some characters, well, lack character. That is to say some of the males are womanizers and some of the females have a past.

However, a book written with only perfect characters is worthless. How do we learn from their mistakes if they don't make them? How do we learn that we too can be heroes if the book's hero is too far beyond our grasp?

Belisarius does possess great humility and piety with just a few stumbles. However, he is not without trials. He rises up from a simple farm boy to a great general in the Roman army. He meets failure on the battle field but perseveres and learns from his mistakes. He is met with temptation, yet stands strong. He is a model for us and for our children that with tenacity, hard work and dedication combined with strong Catholic principles you can achieve greatness for the Kingdom.

In addition to being a good, uplifting story, Belisarius can be tied into your history studies. The story begins in 504 AD as the Roman Empire is struggling with the Barbarians on one front and the Persians attacking on another. We follow Belisarius from childhood to manhood and we see how he changes history through his skill and dedication. He is considered by historians to be one of "The Last of the Romans".

We're studying the Middle Ages this upcoming school year. We'll begin in September with the 6th Century. We plan to read a large variety of historical fiction to accompany our studies and Belisarius: The First Shall Be Last is, fittingly enough by it's title, first on the reading list.

I did have one quibble and it wasn't even about the story. The cover of the book is quite lovely but to me it says, "This is a book for younger children." In my opinion, this is a book for high school to adult. Other than that, and a few minor editing errors, I truly loved this book. It's a story worth reading. Now, if it was available on audio that would be really sweet!

Note that this is the first in a series of two books so you don't get a nice clean ending. I hope to get to Belisarius--Book II: Glory of the Romans soon. Very soon.

Posted by Maureen at 6:50 AM No comments:

I am very happy to announce that my original book with Rachel Mackson, A Catholic Homeschool Treasury: Nurturing Children's Love for Learning is back in print. This time as an e-book. I kept the original body of the book intact but the appendices have been brought up to date.

This is a nice little book, especially for the new homeschooler or homeschoolers of younger children. It's a gem for only $2.99. I hope you'll check it out and tell others about it too.

Currently, it's available from Amazon for their Kindle. I hope to add other formats in the future.