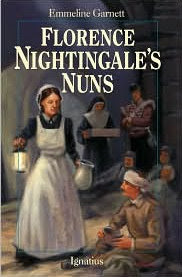 Description: At the age of 24, Florence Nightingale decided to dedicate herself to the care of the sick, especially those wounded in battle. She worked for nearly a year with the nursing Sisters of St. Vincent de Paul in Alexandria, Egypt. After that, when she established a hospital to tend the wounded during the Crimean War (1854 - 1856), she welcomed the assistance of thirty-eight women, including a group of Catholic nuns. This Vision Book for youth presents the moving story of those ten heroic nuns, from the Convent of Mercy in Bermondsey, England. The conditions in military hospitals at that time were extremely primitive and often lacked even the most basic necessities for treating the wounded and dying. But these dedicated nurses, especially the devoted nuns who saw Christ in their patients, sought to give them the very best care possible. Their successful struggle to establish higher standards of sanitation and care became widely known after the war, and Florence Nightingale became famous.
Posted by Maureen at 12:19 PM