I got to meet and hang out with Holly Pierlot, author of A Mother's Rule of Life, at the Michigan conference. All my friends tell me that Holly's talks were absolutely inspirational. (That's one of the bummers of being a speaker yourself, you miss all the great talks!) I'll let you know when the Michigan Catholic Home Educators have the tapes for sale at their website. In the meantime, you can visit Holly's website here. BTW - Both Holly and I will be at the Milwaukee conference in April 2007. I'm looking forward to it!
Posted by Maureen at 7:30 PM 1 comment:

To voice your opinion on gay marriage, go here.
Posted by Maureen at 10:40 PM No comments:

Addendum. Forewarning: This book contains some off-color language and in the discussion of purity some graphic descriptions of intimate acts.

From amazon.com:
From Publishers Weekly
Starred Review. As personal faith stories go, Lickona's is a breath of fresh air, thoughtfully written and happily absent of platitudes and pious moralizing. A 30-year-old husband, father of four and writer for the San Diego Reader, an alternative weekly, Lickona lives a Catholicism that is orthodox, but also dynamic and relevant to modern culture. He reads Salon and the Onion and gleans life lessons from contemporary film and fiction even as he embraces beliefs and traditions rejected by his parents' generation. He admits to being a virgin when he married, and he and his wife practice natural family planning in keeping with their church's ban on artificial birth control. Lickona also wears a scapular, fasts during Lent and has a statue of St. Joseph in his front yard. In writing about these beliefs and practices, he explains how he came to accept them, often after a period of questioning. As he navigates the realm of Catholic faith in the 21st century, Lickona reflects candidly on his failures, foibles and doubts. He confesses to "parish-hopping" in search of a Mass that will not disturb his peace of soul, to personal struggles with "constant wanting" and anger and to his weakness in communicating his faith. Most readers will disagree with Lickona's assessment that he is a poor communicator and will find themselves captivated by this winsome story of a soul. (Apr.)
Copyright © Reed Business Information, a division of Reed Elsevier Inc. All rights reserved.

Book Description
Dave Eggers meets G. K. Chesterton in this funny, wise, and acutely perceptive memoir by a precocious young Catholic. For a wine connoisseur and fan of Nine Inch Nails, 30-year-old Matthew Lickona lives an unusual inner life. He is a Catholic of a decidedly traditional bent.

About the Author
Matthew Lickona is a staff writer and sometime cartoonist for the San Diego Reader, a weekly newspaper. Born and raised in upstate New York, he attended Thomas Aquinas College in California. He lives in La Mesa, California, with his wife Deirdre and their four children.
Posted by Maureen at 3:36 PM No comments:

To view pictures from our Colorado vacation click here. (I hope this works!)

Addendum: Oops, they were uploaded out of order. For the most part, they're backwards - from the end of the trip to the beginning. Sorry I don't have any from the conference.
Posted by Maureen at 12:31 PM 4 comments:

Sometimes the best recipes are the ones that you make up on the spur of the moment. After all, they say, necessity is the mother of invention. Yesterday, I found a loaf of French bread that had been forgotten. It was still good, but terribly stale. So, I decided to make bread pudding. I searched the cupboards and found a bag of white chocolate chips. And in the fridge I found raspberries left over from canning, along with milk and butter. It turned out really good. In fact, I had the leftovers for breakfast this morning. Yum! Here is the recipe that I made up:

Cut up the bread into bite-size pieces. Best if stale.
In a bowl mix together the eggs, milk, vanilla, and sugar. Pour over the bread. Best if you let it sit for an hour or so to soak in the liquid. You could even do this ahead of time early in the day and put it covered in the fridge.
Fold in the chocolate chips and raspberries.
Spray a 2-qt. casserole dish with Pam and put the bread pudding into it. Put dabs of butter all over the top.
Place into a 350 oven for about an hour.
Be careful, it's very hot when served right away. But also delicious!
Posted by Maureen at 5:49 PM 2 comments:

Labels: In the Kitchen

(I have loads of pictures to share, but Blogger is being touchy this afternoon. I'll try to upload them again later.)

Vacationing in Colorado was awesome. The Rocky Mountains are breathtaking, but also a bit scary. We started at Estes Park, camping at Long's Peak. Rob and the kids hiked up above the tree line where they had a snowball fight. (Yep, in June!) The four-year old and I had to stay behind as we had a touch of altitude sickness.

Then we moved on to Twin Lakes, near Leadville. Leadville is the highest city in North America at 10,430 feet elevation.

We drove up Independent Pass, which is the highest pass in North America (12,095 ft.) and crosses the Continental Divide. You need nerves of steel to drive this road. The 10 mile-per-hour hairpin curves are right on the side of the mountains. If you go off the road just a tad, you're dead. I don't think that they believe in guard rails in Colorado. Adding to the fun are the bicyclists sharing the road with you and the snowboarders hitchhiking to the top (then they snowboard to the bottom).

Pike's Peak is even more scary. They have pulloffs where guys check your brakes to make sure that they're not too hot.

I did pretty well driving in the mountains. (We took two cars and I wasn't about to let teen son drive in the mountains, so there was no getting out of it.) I made sure to use my lower gears and to pump the brakes gently. However, toward the end of the trip I had a bit of the mishap. We were coming down from the Black Canyon, which btw is absolutely breathtaking - I don't know how anyone can doubt the existence of God after seeing such a site. Anyway, I could feel the brakes getting spongy as we came down the mountain and it felt as if the brakes were about to go completely, so I pulled off the road. Black smoke was pouring out from under the front wheels and you could smell burning rubber. After Rob pulled my white knuckles from the steering wheel (I never knew that one's hands could sweat so much), we pulled out a blanket and had a picnic lunch while the brakes cooled. We prayed a family rosary before getting on the road again. I wasn't about to get back into that car until I prayed!

After that we backtracked and found a national forest on the side of Pike's Peak to camp. Everywhere we camped in Colorado there was always the danger of running into a bear. We were cautious and went over the bear precautions with the kids. But at this campsite, the danger was a little higher as they had two bear sightings just days before. And then there were the mountain lions. But we were reassured that the mountain lions would rather eat deer and elk than people. (Oh yeah, that made me feel better.) To make up for the scare, the hiking was the best of any of the other campsites.

I left Rob with five kids and the two bears while I went off to the conference with two of the older girls. We got to stay a night with my friend Kim on the plains. It was nice to be someplace with a shower after two weeks of primitive camping, but even nicer to be able to visit with a dear friend. The girls and I also got to spend a night at the Radisson Hotel, which was truly a treat.

The conference was amazing. They don't get a huge turnout, yet the organizers put on a conference that is just as good as any of the larger conferences. It's a two-day conference with loads of speakers and workshops. They also have a fancy sit-down dinner on Friday night, which was especially lovely. The girls loved all of the great door prizes and won a beautiful piece of stained glass.

About half way home to Michigan, Rob commented that he missed the mountains already. I think he enjoyed the trip more than anyone.
Posted by Maureen at 12:00 PM 3 comments:

Labels: Friends on the Net 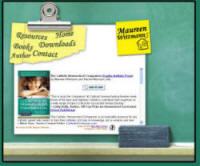 If you like my website, and you're looking for a web designer, you've got to check out Mad Hatter Design. The designer that I worked with, Kaleb, did a great job. He was so easy to work wi 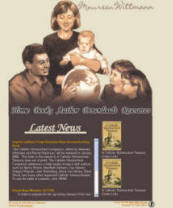 th and timely too. He even put up a temporary site so that I could check on his progress. In the end he delivered a website beyond my expectations. In fact, he delivered two separate website designs for me to choose from. I just can't say enough nice things about Mad Hatter Design. BTW - they also do logo and business card design.
Posted by Maureen at 7:29 PM 2 comments:

Labels: Friends on the Net

Vacation is over, conferences are done for the year, and I've finished writing the literature book. I should be back to blogging regularly come Monday. Whew!
Posted by Maureen at 8:50 AM 1 comment:

I had the opportunity to meet and chat with Michele Quigley in Colorado. Some of you may be familiar with Michele through Mater Amabilis. She also publishes a very lovely series of planners for Catholic men and women. In fact, I am now the proud owner of a Catholic Woman's Daily Planner and I must share with you all that it is absolutely beautiful, as well as functional. It goes from August 2006 to September 2007, so it's perfect for the upcoming school year. I love it!

Each day has the day's saint and readings. It is filled with daily prayers and wonderful quotes from the saints, making this a truly Catholic planner. You can even order planners with lesson planning and record keeping for your homeschool. You can also order meal planning pages to help with home management, which I love.

To check it out, visit Michele's website: Family Centered Press.
Posted by Maureen at 9:32 AM 2 comments:

We've been camping in Colorado for almost two weeks and I have so much to share with you. But alas, no time. I've got to get my beauty rest for the conference tomorrow. I will tell you that it's beautiful here! Also, got to meet Rebecca Dussault today in real life person. Certainly one of the highlights of the trip. She gave a talk on both her Olympic and spiritual journey, which was quite inspirational.
Posted by Maureen at 11:35 PM 1 comment: