Review: The Great and Terrible Quest 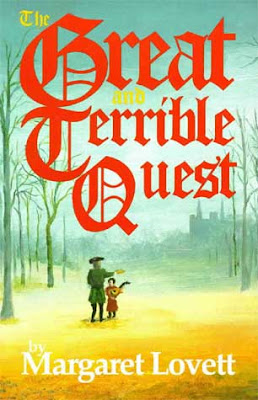 The Great and Terrible Quest by Margaret Lovett [Avyx]
Grade Level: 6th grade and up
Genre: Medieval Fantasy (I just made that up. Not sure if there really is such a genre or subgenre. But, hey, it sounds good to me.)
This was an absolute joy to read. Oh, I had a few quibbles but then I always do. I found myself confused at some points about who was talking. This is something that could have easily been fixed by an editor changing "he said" to "Trad said". Considering that's my biggest quibble, we're good to go here.
I did read a review at Amazon that complained the book was anti-Church. I disagree. I would have preferred a more Catholic Christian ethos to the story but I don't think it was "anti-Church". Yes, there are bad priests in the book but there is also the good and kind archbishop. We all know this is reality. There are good and bad people in all walks of life. And, in this particular story, it is a very dark time in the kingdom. The land is in the hands of evil lords. Times like that bring out the worst in people.
Yet, the worst of times can also bring out the best in people. Hence our heroes of the story. The protagonist, a ten-year-old orphaned boy left in the care of his cruel and despicable grandfather, has a heart of gold. In spite of his personal difficulties, the boy is generous and kind to anyone in need, even though it means serious hardship for him.
We also meet a mysterious man who has been terribly wounded and near death. He appears to be a knight on a quest, but his memory has been robbed by a physical trauma. Yet, as he heals, he works to overcome this trial so that he may complete his knightly quest (though he does not quite know what it is). He is obviously a man of valor as well as tenacity.
There is one more hero to mention, the juggler. I think if I had to pick a favorite, it would be the juggler. He's a wimp ... at first. He is scared out of his wits. Again, these are dark and fearful times. The boy and the knight need the juggler's help but it could easily mean death for the man. Without giving too much of the plot away, I'll just say that the juggler turns his back on the two ... at first. But in the end, he does the right thing and he does it well.
The best heroes are not necessarily the ones with little to no fear, nor are they the ones filled with bravado. Sometimes the best heroes are the ones who are scared to death and yet still step up to the plate and go beyond what is ever expected of them. They're the ones I personally gravitate toward.
Overall, I found this story to be fun and enjoyable. I was barely able to put it down until I could get to the last page. First, because there is an intriguing mystery to solve (who is the knight and what is his quest) and who doesn't love a good mystery. Second, it is always fulfilling to read a story with strong characters who are good examples for our own lives. I believe that such fantasy stories help give us strength to do the right thing, right here in the real world.
Questions to Ask Yourself as You Read:
What makes a hero?
Is the Church treated fairly?
Do I have what it takes to do the right thing even in the darkest of times?
Is it good for future leaders to have experienced hard times? To have lived amongst the poor?
What is it that drives the knight?
How is the juggler living out Scripture?
Other Books by This Author (both are long out of print):
Jonathan
Sir Halmanac and the Crimson Star
If You Like This Book You May Also Like:
Otto of the Silver Hand by Howard Pyle (available FREE on Kindle)
Beorn the Proud by Madeleine Polland
Adam of the Road by Elizabeth Janet Gray
*Note: When you click on the hyperlinked book titles, you will be taken to the book on Amazon to learn more about it. If you choose to purchase books through Amazon after clicking on the link, I do receive a percentage which is applied to my future book purchases. This helps me purchase more books to review. However, I encourage you to use your public library as much as you can.
Posted by Maureen at 7:05 PM 2 comments: 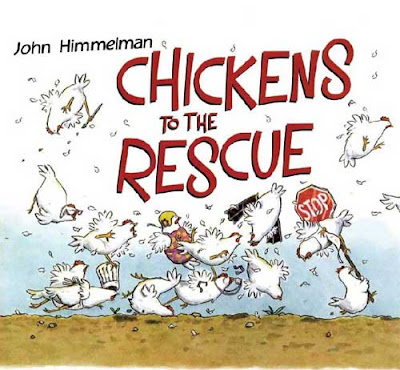 Chickens to the Rescue, by John Himmelman [Henry Holt and Company]

Grade Level: Preschool
Pages: 32
This is just a plain fun book. I mean, come on, when aren't crazy chickens fun?

I won't give away the intricate plot (that's a little picture book sarcasm) other than to say that the chickens save the farm day after day from the crazy mayhem of the family. Well, except for Sunday. Sunday is a day for rest even for super hero chickens.

Make sure to put Chickens to the Rescue on your list for the next trip to the public library. Enjoy!
Posted by Maureen at 6:51 PM No comments: In celebration of Picture Book Month Cay Gibson's A Picture Perfect Childhood is offered on e-book for only $1.99 until the end of November. This is an awesome deal. The e-book format is PDF so you can read it on the computer or your e-reader.

I already own the print version but for $1.99 I can't resist putting it on my Kindle. How nice to be able to have it easily available in my purse for library visits.

Buy it today and celebrate childhood with your favorite snuggle-bug by clicking here: A Picture Perfect Childhood.

Thank you Cay for this wonderful gift to us book lovers!
Posted by Maureen at 9:11 PM No comments:

100 Books for Kids Who Love to Read

I put my last book project up on the shelf when I got involved in Homeschool Connections. I'm still deeply involved in the daily running of HSConnections and working like crazy on it, but I have been feeling a strong tug to get back to work on 100 Books for Kids Who Love to Read. I've set aside time each week to work solely on the book.

I've also neglected this blog since taking on HSConnections. This book project should pump a little bit of life back into the blog. I'll use this forum to work out ideas, post book reviews, and get your opinion now and then.

In the meantime, please pray for me and this project.
Posted by Maureen at 7:11 PM No comments: