PSN5: Olivia and the Little Way 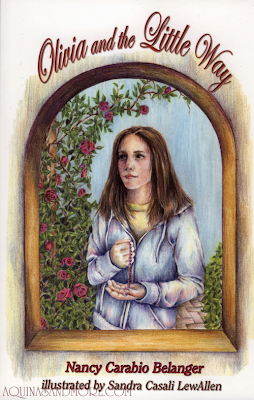 Reviews:
Catholic Exchange
Posted by Maureen at 6:54 AM 1 comment:

I got a gas grill. That's big news around here. I've been without a grill for eons which is a long time when you love cooking outside. Every birthday, Mother's Day and Christmas, a new gas grill has been at the top of my wish list. My husband hesitated to make the purchase because, well, because he's a vegetarian.

Yep, the veggie guy was worried that the carnivores who also live here would take over all the meals if we got a new grill. He saw the grill as nothing more than a vessel for delivering slabs of meat to the masses.

I assured him, over and over again, that the grill can also be a vessel for delicious, yumcious vegetarian cooking. He didn't believe me but he finally got the grill for me anyway. And, being the great husband he is, he didn't go out and buy some junky grill from the local Wal-Mart, he special ordered a well made grill sure to last a lifetime. In return, I set out to prove his meat thesis wrong.

The grill was delivered 2 weeks ago and I've used it 12 out of the past 14 days. Sunday brunch even found it's way off the grill.

I had some old standby recipes but I decided to take things up a notch. I searched the internet and found loads of great veggie recipes for the grill. Rob has been more than happy to be proved wrong. Every night has been a treat for him and he couldn't be more thrilled.

Oh, it hasn't been complete vegetarian heaven here as hot dogs, hamburgers, and steaks have been grilled too but they stay on the left side of the grill and the vegetables and fish stay on the right side. (Lucky for me Rob isn't a vegan -- he eats fish which is great on the grill.)

So, if you would like to liven up your grill and add some vegetarian recipes to your cookbook here are a few to try:

This is just a sampling of what we've been enjoying here at Chez Wittmann. I hope that even if you don't have a vegetarian husband, the next time you fire up the barbecue pit or gas grill you give veggies a special place on your grill.
Posted by Maureen at 6:56 AM No comments:

Labels: Family Life, In the Kitchen

Walter and I have been busy, busy. Walter got the brand new Homeschool Connections website up and running yesterday. It's still under construction but go check it out anyway and let me know what you think about the design. I'd love to hear your feedback. It looks a little bit like my Catholic Treasury website. Walter will have all the content loaded up within the week so you'll want to check back to see all the neat stuff Homeschool Connections has to offer, from free webinars to online classes.

Until then, I'd like to share the 2009 fall classes with you:
These are all high school classes. We have enlisted a middle school teacher who will offer classes for us in the spring and possibly late fall.

If you'd like to get on our newsletter instead of checking the website regularly, there is a sign up box in the top right hand corner of this blog. That will keep you up to date on free webinars, courses, and money-saving coupons. Between now and September, newsletters will go be going out every Monday. However, that will lighten up greatly once the fall semester starts.
Posted by Maureen at 7:46 AM 2 comments:

EWTN Radio and Kids at Mass

I had an interview this morning with Brian Patrick on EWTN Radio. It was live in Cincinnati and recorded for the global audience later. I don't know yet when it will run, but I'll post it here when I find out.

The interview was based on an article I wrote for Catholic Exchange: Mass Control. It's a Top-10 list of ways to keep the kids not only under control during church time but helping them to learn to love the beauty of the Holy Sacrifice of the Mass.

I originally wrote the article a good number of years ago and CE decided to rerun it this week. It's kind of funny for me to go back and read it as my family is at such a different stage now. I no longer have wee children. My youngest is 7, so visits to the cry room are no longer a necessity. In fact, it was really good for me to reread that article because I can now see the fruits of putting those 10 tips into practice over the past 2 decades. I can honestly say that I have children who are reverent at Mass and understand the liturgy. Though, trust me, there have been times when I wondered if this day would ever come.
Posted by Maureen at 9:01 AM No comments:

How to Keep Homeschool Kids from Getting Overwhelmed

I received an email from a mom looking for help in inspiring her children and would like to share it with you here. I answered her email with my own ideas for help, but I'd love for some of my blog readers to jump in with advice.

Here is the email:

My husband and I have been homeschooling for a year now. We are really starting to see all the benefits in our children. The only thing we are having a little trouble with is deciding how much time on each subject. Our son is 12 and daughter is 9. They both do really well, but I see that a lot of times they see all the work they need to get accomplished and get overwhelmed and basically get in a bad mood or frankly they just sit there. Eventually they do it, but I know there has to be an easier way. Is it better to give them a subject and say,"I don't care how long this takes just get it done by the end of the day." Or is it better to set time aside for each subject and say, "Get as much as you can done"? I would really appreciate your help and guidance. Thank you for your time.

So, what is your advice? What is your experience? Please tell us in the comments.
Posted by Maureen at 10:02 AM 10 comments:


I couldn't find any reviews online. Please leave a comment if you know of any.
Posted by Maureen at 12:07 AM No comments: