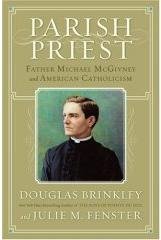 From Publishers Weekly
Fr. Michael McGivney (1852–1890) is under consideration for sainthood in the Roman Catholic Church. So why has almost no one heard of this Connecticut parish priest who helped to transform American Catholicism? McGivney entered seminary when he was just 16 and studied there until his father's unexpected death forced him, the eldest child, to abandon his studies and support his family. Although the diocese eventually came through with a scholarship, McGivney never forgot the devastation of his family's sudden poverty and devoted much of his priestly life to helping the Catholic poor. He founded the Knights of Columbus, an organization that simultaneously met two critical needs of Catholics in the late 19th century: it was an insurance policy for the indigent, and its devotion to America and patriotic ideals helped to assuage anti-Catholic prejudice. Brinkley and Fenster offer a popular history that is accessible in style and respectful, albeit at times hagiographic, in tone.
Posted by Maureen at 1:08 PM