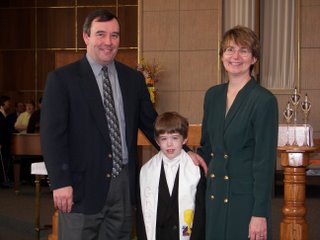 Sparky made his First Holy Communion on Sunday. It was a very special day of course, but even more special, in a way, because he has celiac disease. Celiacs cannot digest wheat and so Sparky could not take Jesus in the form of bread. Instead, he took only the Precious Blood.

Our pastor did a lovely job using Sparky's special circumstances as a teaching moment. In his homily he spoke of how Jesus, Body and Blood, is present in both the form of bread and wine.

Below is an article that I wrote five years ago on this topic for OSV. It is interesting for me to reread it now. In it I mention how my heart ached. But on Sunday, my heart lept for joy. I wept joyfully as my son took the chalice into his hands. All that mattered was that Sparky really loves Jesus and was thrilled to be partaking in Holy Communion. The wheat thing didn't matter at all.

“Come into my heart Lord Jesus and stay with me forever.”

As I sit at my computer, my seven-year-old daughter is teaching this prayer to her 32-month-old brother. It is a prayer of spiritual communion; a prayer to be said when one cannot partake in Holy Communion. Although it is very sweet to see my little ones praying together, my heart is aching. It aches because I know that there will be times in my son’s life when he will not be able to take Jesus in the Eucharist.

My son has celiac disease, a lifelong disease with no cure. Fortunately, there is a treatment: a change in diet. Persons with celiac have an intolerance to gluten found in wheat, rye, barley, and oats. As a result they must adhere to a strict gluten-free diet. Rice and corn are safe substitutes.

Recently, a Boston family made national news as they left the Catholic Church when they were told that their 5-year-old daughter, who suffers from celiac, would not be able to use a rice wafer when she received first Communion. The family instead chose to join the Methodist church, leaving the Real Presence behind.

I understand this family’s frustration, but leaving the Catholic Church is not an option for us.

This is not a disease to be taken lightly. Gluten damages the intestinal lining so that it cannot properly absorb nutrients. Even the smallest trace of gluten can lead to future illnesses, such as lymphoma.

At twenty months, my son was malnourished even though he ate a well-balanced diet and took a daily vitamin. He suffered serious weight loss, developmental delays, and cried constantly because of abdominal pain.

After he began the gluten-free diet, my husband and I saw wonderful changes in our son. We were thrilled. Then one day we realized that he would never be able to digest a communion wafer.

We asked our parish priest what we should do when the time came for our child to receive his First Holy Communion. In his forty years as a priest he had never encountered this situation and was unsure of how to proceed. So I sought the advice of Catholic adults with celiac. I had already begun networking through a local support group and the Internet, so I added Holy Communion to my list of questions.

I soon learned that a host made of rice flour was not a legitimate substitute for a wheat host. I am not a theologian, and cannot begin to lay out the theological argument for this, but 2,000 years of tradition appears to insist that the host must contain gluten in order to be a valid consecration.

The pastor of my in-law’s parish uses a low-gluten host, which is valid. This still causes some damage to the celiac priest, but he chooses to take the risk.

One woman told me that her husband receives Communion in the hand and brings it back to the pew, where he breaks off a very small piece to share with her, since even the smallest crumb is still in essence Our Lord. Most people that I talked to take communion under the species of wine and forgo the bread altogether.

Young children need only touch the wine to their lips. Since the particle of host that is dropped into the wine by the priest contaminates the entire chalice with gluten, a separate chalice is provided for the celiac individual.

Life is unfair, especially to little children who suffer from incurable diseases. My son will never share a pizza with his buddies, walk into a McDonalds to order his heart’s desire, eat birthday cake with his schoolmates, or take Communion under the species of bread.

As he will have to do with many other situations in his life, he will make special arrangements in advance in order to take Jesus into his body. When such accommodations cannot be 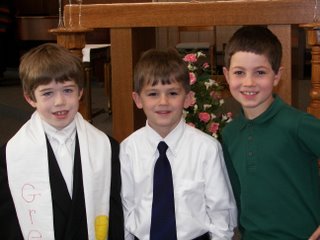 made, he will ask his Lord for a spiritual communion.

Even when he cannot take Jesus into his body, he can take Him into his heart. And he can offer up his sacrifice in love.

Fascinating, Maureen. We were at Mass last night for a Parish Mission. The priest was talking about the Eucharist & Church Laws. For some reason the celiac dilemma came to my mind (as a nurse) when he mentioned the host must be wheat-based.

I made a note to ask our parish priest about this dilemma.....and your answer is here within 12 hours of my thought!

What a cute little guy! Congratulations to the whole family, filled with grace by the sacraments.

Beautiful post Maureen! Thanks for the information on celiac disease. A heartfelt congratulations to Sparky!

I am sure you are loaded with recipes for him, but here is one for peanut butter cookies that I made for a pal of mine at college. No flour at all!
1 cup peanut butter (crunchy works best)
1 cup sugar
1 egg slightly beaten
1 teaspoon vanilla

Cream pbutter and sugar, add slightly beaten egg and vanilla. Shape into 2 inch balls on non greased cookie sheet. Criss cross with fork.
Now here's the part I always forget unless I'm actually in the kitchen- you bake them at 350 for 10/12 or 15 minutes. When you can smell them through the oven they're done. They are the best (when i don't burn them). Hope you can use the recipe- I don't know what other allergies your family may have.

Thanks for posting this, Maureen. We'll do the advance work when he visits Pittsburgh!

God bless your boy on his First Holy Communion!

Your article is so moving, especially when paired with the joyous Communion photos!

I understand that the Bishop of Duluth, MN, Dennis Schnurr has celiac disease.

I'm sure he would be willing to answer questions from anybody on the subject.

This is the Bishop's secretary as listed on the Diocesan web page:

Thank you so much for the tip Irene! I do have a friend who tried the low-gluten host and says it gives her a tummy ache, even though the gluten level is so low. So, we'll stick with the Precious Blood for now. Don't want to take any chances with our little guy, since even small amounts of gluten can lead to so many other awful diseases. But it's good to know that there is a source out there for low-gluten host as I'm sure that there are adult celiacs who would be interested.

And thanks for the recipe and all the good wishes!

Hi Maureen - Holly here!
You know that you can make GF pizza... just responding to never eating pizza. We have it all the time. Email me for the recipe if you need to. I also have a good hamburger bun recipe too!
Blessings

After consecration the host is no longer bread. It's the body and blood of our Lord-(Eucharistic miracles, anyone?). Do you not think when the Lord gave us his body and blood, that he didn't know there would be people with celiac disease? Everyone can take our Lord, oh you of little faith

Yes, I am familiar with Catholic teaching on transubstantiation. And, yes, I am aware that God knew there would be children with celiac disease.

This is not a matter of my lack of faith. The Church agrees that gluten remains in the consecrated host which is why they now have low-gluten hosts for celiacs.

The consecrated host has the outward appearance of bread and wine, look, smell, taste, remains the same but the inward substance becomes the Real and True Body and Blood of Jesus. The gluten is part of the outward substance.

Yes, the Eucharist is the Body and Blood of Christ truly present. And, yes, Eucharistic miracles take place every day (I love Joan Carroll Cruz's book on the subject from TAN.). But the fact remains that gluten is still present.

Did you thank for the lord for this disease???

Yeppers. We praise God and count it all joy.