Day Three At the Fair 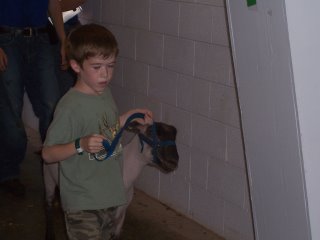 Another great day at the fair. Sparky showed a sheep in the pee wee division (5 to 8 years old). They don't place, but instead everyone gets a participation ribbon. The idea is to get them use to showing in the arena and being judged. They were all so cute and the judges so sweet in helping them present their sheep. The amazing thing is that none of the sheep got loose, a first I think. Usually, there are several sheep running around the ring with little children chasing after them. Actually, I'm a little disappointed that we missed the comedy of the sheep this year.

Teen Son showed his sheep in the senior division. It was his first year and he was up against kids who have been showing their whole lives. Yet, he did pretty good. He struggled during the showmanship portion when Mario (or was it Luigi) just didn't want to behave. In true 4-H fashion, the judge offered some words of wisdom to help him out. The sheep behaved better in the market class and placed 4th and 7th. Today they'll be auctioned off and hopefully Teen Son will make a little profit on the sheep project.

Princess Rose participated in the fashion revue in the evening. The little 5 to 8 year olds were so cute up on the stage. Princess Rose had practiced walking the stage at home. Then right before stepping on th 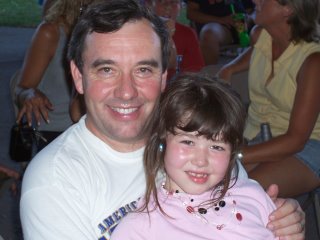 e stage, the teen girl, who was helping the little girls, told Princess to make sure to stand in the center so the judges could see her. Well, that's what Princess did, she stood the whole time in the center and didn't walk a step. It was so funny. I think she really enjoyed watching the older girls model their sewing creations as much as participating.

Today, we take a break and stay home. It's been raining off and on all morning and hopefully that'll cool things off for tomorrow. No competitions tomorrow, just enjoying the rides.
Posted by Maureen at 10:30 AM