The Blessing of the Rats 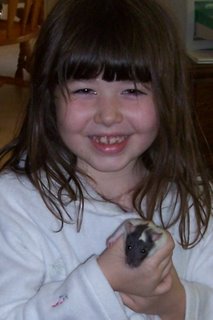 Being in a Franciscan parish, we had the blessing of the animals this last Sunday. It's an event that we attend every year and this year was no different.

Teen Daughter didn't want to go as she was afraid of being embarrassed, with good reason. But she was a good sport and went anyway.

When we arrived a few minutes early there were already about ten of our fellow parishioners there. All with dogs.

We pulled up in our blood-red, full-sized van, children poring out of every door, each with a different pet in tow. Rabbits, mice, hamsters, rats. Some in carrying cages, some in plastic balls, and others simply in hand.

As we approached the blessing area, one of the elderly parishioners exclaimed, "Oh my God, they have rats!" She and her puppy moved quickly away from us. In fact, about half of the parishioners shied away from us. I don't think that these folks will ever look at the Wittmann family the same again. We've gone from the nice big family to the kooks with rats.

It probably wouldn't have been so bad, except that the boys removed their rats from their carrying cages and let them crawl all over their shirts. I would've scolded them, but it was Rob, the Rat King, who put them up to it.

The rats and other wee animals were sprinkled with holy water and blessed by Father. I can't say that their new holy state has warmed my heart to the rodents -- I still keep a safe distance from them. But it made the children happy.

Well, except for Teen Daughter, who, along with her rabbit, was terribly embarrassed.
Posted by Maureen at 12:30 PM

We have the most blessed turtle on the block. Now if we could just figure out how to get him to wear a collar with the medal they handed out.

Well Maureen, have you warmed up to the new members of your family yet ;-)
At least you don't have a dog who never bites and never bit anyone but one priest who just happened to be visiting us. Maybe she didn't like Maryknoll priests.

Oh gosh Esther, that is something! Maybe you're dog is an athiest ;-).

I've warmed a wee bit to the rodents. I don't run screaming anymore. But I haven't brought myself to pet them yet. Ick.

Now, that would be cute -- a little medal around the turtle's neck!

I wonder if they make scapulars for pets :-).

Oh, Maureen, how funny! I can just picture the children with all their adorable and educational pets!

That must have been a sight to behold...

...but in defense of dog owners, I would have moved away from you too. My German Shepherd would have suspected your children's pets would make an excellent snack. I would have been afraid that one quick rat would have darted in our direction with disasterous consequences.

You know, it's funny, I was worried too that the dogs would want a taste of the small animals. But the dogs didn't react at all. A few friends came right up to the kids with their dogs and the dogs were very good -- even with the rats out of the cages.

Now, I imagine that cats would be a different story. But the only cats there were in carrying cases.

Oh Alice, I would have loved to have been there!