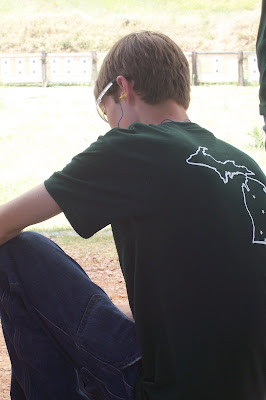 One interesting thing about attending a national championship is learning how other teams train for their sport, as well as how the teams are chosen.

Some states, I learned, have qualifying matches. In order to make the state team you go to the qualifier and compete for a place. The top four shooters in each discipline make the team.

In Michigan, we do things differently. If you want a place on the state team, you fill out an application. Your scores from previous competitions are to be listed, but you also write an essay, answer a few questions about yourself, and include letters of recommendations.

I like the way we do it here. Yes, skill is important, but there is so much more to choosing someone to represent our state. 4-H is about forming the whole person - not winning for the sake of winning.

This was evident to me on Thursday when Teen Son found an adding error in his score. He went to the judge and let him know that he was given ten too many points. Now that's the 4-H spirit!

Teen Son assumed the lost points also lost him any chance at first place. Imagine his excitement when he still won the gold medal that evening! He was also given special recognition at the awards ceremony for his honesty.
Posted by Maureen at 10:04 PM

That is awesome! Welcome home, by the way.

I am so glad for Teen Son. I am also pleased to see that they recognized his honesty!

Watching our children prove their character is the greatest joy of all, isn't it?

Glad all of you are back, safe and happy.