From White Ribbons to Gold Medals 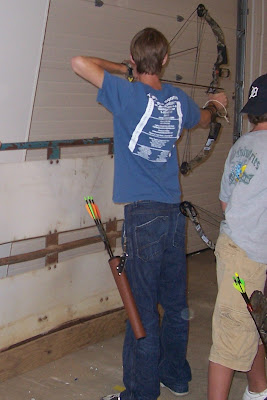 The shooting sports awards were Tuesday and the kids came home with loads of medals and ribbons. Teen Son, Teen Daughter One, Teen Daughter Two, and Buster all made their parents proud. Watching Teen Son pick up his gold medals, I couldn't help but reflect on our first 4-H archery competition.
Six years ago we decided to try archery as a family sport. We began in April, meeting every Monday with our 4-H club, using borrowed equipment, through the middle of June.
I'll never forget sitting in my lawn chair watching the kids at that first 4-H competition. Teen Son, then an 11-year-old boy, completely missed the target with his first six arrows. I buried my face in my hands and prayed, "Please Lord, don't let him end up with a zero. Please, help him hit the target. Please!" Most of the next 54 arrows at least hit the target. His end score was dismally low, but it wasn't a zero.
At the award ceremony two weeks later, my son picked up his white ribbon ("C" award) and I assumed that was the end of archery. I thought he would be so discouraged that there wouldn't be enough enthusiasm to continue the sport when spring came around again.
I couldn't have been more wrong. We went home and TS set up a target in the backyard and began to practice. When spring came around, he not only practiced at the coach's house on Mondays, but throughout the week at home. That year, TS came home with a blue ribbon.
In years to come, gold and silver medals would become the norm and he would compete in archery at the national level. He came to enjoy other shooting sports and this year found himself the national 4-H champion in muzzleloading.
I share all this with you, not so much to brag but to encourage the kids who read this blog. Champions aren't born, they're made. They're made of persistance. If, at first, you don't succeed, try, try again. Champions don't win every competition (even Tiger Woods has a bad day now and then). They're different from others because they put those losses behind them and get right back to practicing. So, if you have a dream and you experience setbacks, don't give up. Try, try again.
Posted by Maureen at 12:11 PM