The Mystery of the House History 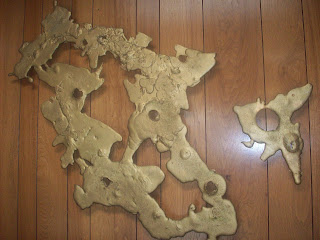 Our new house is a mystery. It was built in 1968 and it's been vacant for almost 2 years. That's about all we know of it's history. However, clues are beginning to present themselves:

Then there is this piece of artwork when you walk in the front door (above). Could it be another clue? Is it a map of some sort?

Could the house have once been owned by Russian Jews with bad taste running a phone bank smuggling dissidents out of the old Soviet Union?

this is so cool for you guys! I grew up in a house with a mystery and we had SUCH FUN scaring ourselves and imagining exactly what happened to the Sea Capt that had built the house for his wife who then died and he just walked away (this is back in 1915-1919 or so in San Francscio) ... the house had to be rented for years by the City until they declared the title free and clear and my parents bought it in 1962 ... 50+ years later....

Have a great time imagining!

My bet is a bed and breakfast run by immigrants from he Old Country.

Lol, I love your theory, Maureen!