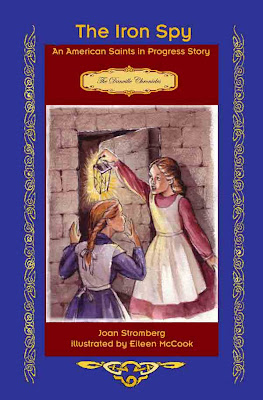 Let's just get right to it. The winners of The Man Who Never Died by Rev. Gerald T. Brennan are:

Paula of MA
Amber of MI
Susan of GA

Congratulations ladies!!! For those of you who would like to own a copy of The Man Who Never Died, Sophia Institute Press is still having that 25% off sale. But hurry, it ends Dec. 17th.

Now, for today's contest. Some good news first. It's Saturday. That means that I get the day off tomorrow. Which means that you get an extra day to get around to entering the contest. So, email me (RWitt1776 at aol dot com) with your name and address before 5:00 AM Eastern Time on Monday morning in order to be entered.

Today's book is a history mystery. It's something like the American Girl history mystery series, only better. The Iron Spy: The Danville Chronicles by Joan Stromberg is part of a new series from Ecce Homo Press called American Saints in Progress Stories. I hope that there are lots more coming in this series!

From the back cover:

It's 1875 and in the dark mines of the hills of Pennsylvania where coal is king, the Molly Maguires rule with terrorism. Could they have finally come to the sleepy iron-ore town of Danville?

After an explosion at the biggest iron mill in town, 12 year old Mary Mulhearn tries to clear her father of suspected Molly Maguire terrorism. Daughter of an Irish immigrant, Mary must use all her faith, her wits, and even her quick feet to stay one step ahead of the company spy. But who could he really be?

This great adventure story is for ages 10 and up.
Posted by Maureen at 8:28 AM

I don't think there is anything else on that period in history and what is nice about Iron Spy is that the author compares and contrasts the Church's teaching on labor to the methods of the Molly Maguries and the Ancient Order of Hibernians. Worth the read!