Immaculee Ilbagiza and the Rwandan Holocaust

Last Friday I attended a talk by Immaculee Ilibagiza, author of Left to Tell: Discovering God Amidst the Rwandan Holocaust, along with some friends, teens, and a couple thousand other people.

If you ever have the opportunity to hear Immaculee speak, do not pass it up. Go! It will change your life. For the better. Go!

Her story is one of forgiveness. Forgiveness of the most unforgivable.

As she walked down the church aisle you could see her nervousness. She didn't expect so many people to show up on a workday morning. But her smile was radiant. She looked right at me and I felt as though I had been touched by an angel. When she reached the podium and saw the large number of students in attendance, she really lit up.

She went on to tell her story of horror, of how she lived through the Rwandan genocide in 1994. She hid in a bathroom, a mere 3' by 4', with 7 other woman. Yes, those numbers are correct -- a total of 8 women in a 3' by 4' bathroom. They could not talk or make any sound (including flushing the toilet unless timed to flush at the very moment the other toilet in the house flushed). They slept standing up. They could not wash or change their clothes. Food was almost nonexistent (Immaculee lost 50 lbs., going from 115 to 65 lbs.). This went on for 91 days. Ninety-one days!

The house where Immaculee was hidden had been searched several times. Searched by angry mobs with nothing but killing in their hearts. They turned over furniture, they slashed open suitcases, they tore into closets, but they never opened the bathroom door.

The power of prayer. Fervent prayer.

There were servants, guests, and children in the house who would've turned the 8 woman over to the mob in a heartbeat. But they never figured out, until the end, that the spare bathroom was off limits.

The power of prayer. Fervent prayer.

When Immaculee finally emerged from the bathroom, the horror continued. The killing was still going on, but waning. Then there was finding and burying the dead. Nearly one million dead in less than 100 days.

The Hutu tribe, about 75% of the Rwandan population sought to completely annihilate the Tutsis who made up 20% of the population (there is a small population of pygmies). They sought to kill them all in the most vicious manner. Many times hacking them to death with machetes, from the unborn to the elderly.

Immaculee found her parents, 2 of her 3 brothers, grandparents, neighbors, college friends, all murdered in this way by the mobs.

The amazing part of this story is that Immaculee forgave. She went to the prison, met the man who organized the killing of her beloved family, and said to him, looking him straight in the eye, "I forgive you."

One thing that strikes you when you see Immaculee in person is her beauty. She simply radiates beauty. The kind of beauty that comes from deep inside and cannot be denied except by the most hardened of hearts. Even her name is beautiful.

I highly recommend her book, Left to Tell. Buy it or borrow it, and definitely share it with others. Please be forewarned that it does contain graphic descriptions of the genocide, but it is necessary to truly understand the story's message of faith, prayer, and forgiveness. I read almost all of it in one sitting (and with a box of Kleenex). I finally put it down in the wee hours of the night, only to pick it up the very next morning as I sat before the Blessed Eucharist at the Perpetual Adoration chapel. It has been on my mind ever since.

I pray the story will never leave my mind. I pray that I will always heed its message: As long as we are breathing and our hearts are beating we can forgive, even the unforgivable. 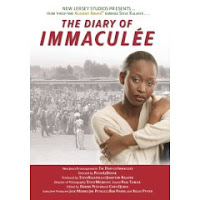 Addendum: I just found this DVD, The Diary of Immaculee, on amazon.com and the reviews are pretty good. I'm going to order it right now. You should be able to find Immaculee's book (it was a New York Times Bestseller) and maybe even the DVD through your library.
Posted by Maureen at 10:44 AM

Here I say I am a big Christian (well, I don't go around saying that but I know how I should live!)but I don't think my first reaction would be to forgive this guy. Kick him several times, scream at him, but not walk up and forgive.

Sigh. I pray for that grace.

Maureen,
I pray for half the strength that Immaculee has in being able to forgive. You might be interested in reading this: http://www.catholic.org/prwire/headline.php?ID=4811