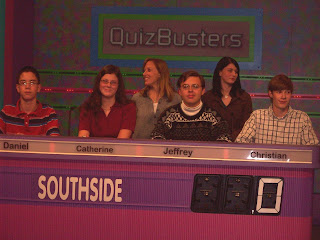 The Quiz Busters taping was so fun!
Rob took the 4 younger kids to Sharpshooters, while I went to the taping with the 3 older kids along with their pal Paul.
They tape 3 shows in a row and our team was scheduled for the final slot of the day, 8:15 PM. We got there at 8 as instructed and found things to be a bit behind. We sat in an "overflow" room along with our competition and watched the taping of the previous show live on a big screen television. It was fun with kids, parents, and coaches from both teams calling out answers. I think it helped calm nerves, even it only for a wee bit.
Then we moved to the studio. The audience was given instructions. No moving about, no whispering, signaling, no eating or drinking, etc. We were even given the opportunity to practice clapping.
Team pictures were taken, the players given instruction, and chairs & name tags adjusted. Then in came the MC and the game was set to start just after 9 PM.
It was quite an exciting game. The two teams were pretty equally matched with their scores neck-in-neck throughout most of the game. A few answers were missed due to nerves, but the kids gave a great showing.
About halfway through the game, the individual team members introduced themselves. I had to smile when the first contestant from our team stumbled a bit as he struggled to remember what grade he's in. It made me think of my own homeschooled children, "I don't know what grade I'm in, my mom just gives me a bunch of books to read!"
The game got really exciting at the tail end, during the lightning round. Questions were being thrown out in rapid fire, about 15 in 60 seconds. Our team was answering them left and right, mostly by our awesome captain, Jeffrey. Then with only 5 seconds left and our team only 1 question behind, a pop culture question was thrown out. I don't even remember the question, but the answer was Beyonce. (I overhead one of the kids say later, "Who is Beyonce?")
I had shared with a friend earlier that day, "If these kids have any trouble, it'll be the pop culture questions." Teen Son joked later, "Now, if all the questions would have been about Latin, Middle Ages history, classical music, and Lord of the Rings, we would have won by a landslide." But, alas, they lost, and by a mere 10 points. I've got to tell you though, it was a great game and the Southside Homeschool Raptors have a lot to be proud of!
I can't until next year -- we'll be back!
Posted by Maureen at 9:57 AM