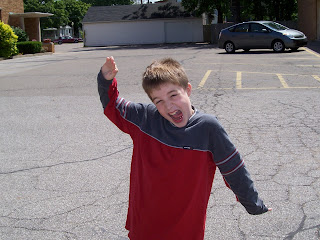 I promised to write up this story for Father Rea (the healing priest mentioned below) and I'd like to share it with you too. This is a true story that happened about two and a half years ago:

The children had just finished their 4-H archery practice in the backyard of Coach Schafer. They put away the equipment in the shed and began to run and play in the front yard. After I figured the children had burned off enough energy, I called them to get in the van. As Buster climbed into the front seat his friend slammed the door after him. Unfortunately, he slammed too quickly and caught four of Buster's fingers in the door.

Buster fell out of the van, screaming and rolling in the front yard. If this had been another child, I might have chalked it up to overacting, but Buster is the kind of kid who can come in from an ice hockey game with blood pouring from his forehead and not even notice.

I jumped out of the driver's seat and ran to him. I held him tight in my lap, trying to figure out how and where he was hurt. I could see him holding his fingers in his other hands. Once I was able to persuade him to let me look at the fingers, I could see deep indentations across all four of them. I knew they were broken.

Meanwhile, Coach Schafer's wife came out of the house and was sitting in the grass with me. She asked if it was okay to pray over Buster. "Yes, definitely!" I exclaimed. She then remembered she had a handkerchief in the house blessed by a priest known for healing (Acts 19:11-12). She ran in, got the handkerchief and brought it to Buster. She wrapped it around his hands and prayed that Jesus would heal him.

We gave Buster some Tylenol and put him in the van. I took the other children home and let my husband know I was taking Buster to the emergency room. Buster continued to be very upset and cried through the car trip and in the ER. When the triage nurse looked at him, she said, "Yes, they do look broken," and she then sent us to an examining room where we waited for the x-ray technician to come for us.

We waited and we waited. Buster, my usually laid back, easy going child, continued to fuss and whimper. There was no doubt he was in a great deal of pain. When we finally got to x-ray, it had been hours since the accident occurred. Upon returning to the examining room, Buster laid down and fell right to asleep. Finally, he was at peace.

The next morning Mrs. Schafer called to check on Buster. I told her, "I think you healed my son." She replied, "No, Jesus healed Buster."

Mrs. Schafer went on to tell me about the priest, Fr. Rea, who had blessed the handkerchief. She had seen people healed through Fr. Ray and shared how those healed often went through a period of great pain before the healing took place. I knew then, at that very moment, Buster had indeed experienced a miraculous healing.
Posted by Maureen at 9:20 AM

Maureen,
Hi, I'm a first time visitor to your blog. Google has this neat feature called "Google Alerts" that notifies me whenever someone blogs about "miraculous healing"...and that's how I found my way to your blog.
I'm in the healing ministry and seek out the experiences of those who've received miraculous healings. I was so happy to read about your experience with your son. Thank you for sharing.

What a wonderful story! In our homeschool co op, I've been teaching an apologetics class, and that verse you mentioned (from Acts) is the very one we talked about that supports the Catholic view of relics and holy objects.

Thank you for sharing that terrific story!

Maureen,
I've linked back to your blog on this wonderful testimony. Thanks for permission, and thank you for visiting my blog.
In Christ,
Marty

What a great story! I am so happy for you.

There are many other stories like this on another site I found: www.oltiv.org

Pretty amazing things are going on and we should be paying very close attention.