Laura Reports on the Basilica 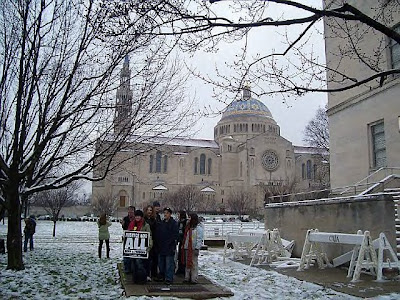 Laura, age 13, decided to write about the Basilica instead of the March:

After walking in the March for Life, which was an awesome experience, we attended Mass at the Basilica of the National Shrine of the Immaculate Conception.

We had some time to kill before Mass started, so we explored the Basilica. It was so beautiful! There are more than sixty five chapels with mosaics of Mary. There was even one with Our Lady of China, who I had never heard of before.

Located in the head of the Basilica is a 3,780 square foot dome mosaic. It includes a mosaic of the Crucifixion, the descent into hell, the resurrection from the dead, and the temptation in the desert.

The Basilica of the National Shrine of the Immaculate Conception is one of the largest churches in the world.

It would be wonderful to visit the Basilica again some time.