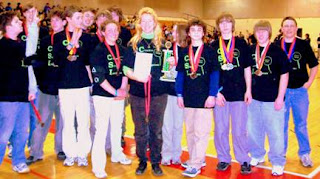 Yesterday was our regional competion for Science Olympiad and the kids did great. Our middle school team placed 5th overall and our high school team placed 2nd overall. In fact, the high school team qualified for the state competion in April. These are incredibly awesome results. We're the only homeschool team in the entire state and this is our first year competing. Our main goal was to have fun while learning science at the same time. Who would've thought we'd actually place in the top-5?

The kids' finish is especially awesome when you consider our competion. The public school teams receive government money. We relied on donations and our own pocketbooks. They've been competing for many years, some for decades. We're the new kids on the block. They can modify past designs for their build-it entries. Our build-its (robots, towers, boomilever, etc.) were built from the bottom up. We beat one team which hires coaches from the university to tutor team members. All we have are parents working with their children. They're together in school all day, meeting regularly. We live all over the tri-county area so our team members communicate via email, phone, and periodic meetings.

It was interesting yesterday as I walked from event to event and I overheard snippets of people's conversations. Our little homeschool team, Creative Science Investigators (CSI), was the big topic of the day. I overheard things such as, "Where did CSI come from?" "Did you see CSI's Scrambler competition?" "CSI's boomilever design was really unique. Impressive!" Of course, I also overheard comments such as, "They shouldn't allow homeschoolers in Science Olympiad." But, I took those comments as compliments. They wouldn't complain about homeschoolers if we didn't do well.

Here's how the competion works. There are 20 different events to compete in for each team. We had 15 kids on the middle school team and 14 on the high school team. Two to three students compete in each event. This works out so that each student competes in 3 or 4 events. Teen Daughter 2 earned 3rd place in Solar System, 5th in Simple Machines, and 2nd in Metric Mastery. Teen Son and Teen Daughter 1 earned 1st place for their Boomilever design (it's hard to explain -- basically half boom and half lever). Teen Son also earned 1st place in Remote Sensing (the mapping of other planets), 5th in Oceanography, and 7th for Designer Genes. Teen Daughter 1 also placed 3rd in Forensics and 6th for Health Science.

The award ceremony was an incredible experience. The kids were so full of joy, you couldn't help but be touched by it. When the CSI high school team took second overall, earning a place in the state competition, they all went nuts. I had to fight back the tears, but managed to take a few pictures (HERE and HERE)

We planned a little get together after the awards ceremony at our home as we only live minutes from downtown where the competition took place. Just a few families had RSVP'ed. But after that big win, no one could bring themselves to just go home. So, my house was filled to the brim with students and parents. After wolfing down pizza, pop, and chips, the kids went outside to play Capture the Flag in the snow and ice (yes, even the high schoolers). When they finally came in after a couple of hours, the middle schoolers settled down to play cards (well, they didn't quite settle down -- it was a pretty wild game) and the high schoolers hung out with the moms helping us map out our strategy for the state competition. Yes, the party was big and a bit long, but it was so worth it. The kids needed to celebrate and the moms (aka the coaches) needed to figure out how we were going to help the kids compete at the next level.

This is way cool! Congrats to everyone!

Maureen, this is fantastic! Congratulations to all! And, good luck with your preparations for the state competition. Please let us know how things go there.

We have homeschool teams here competing in Quiz Bowls. They love it, both in the middle school and high school levels.

I'll do that Alicia. I was thinking of writing up reviews of the books the teens used to prepare for the Olympiad. Being our first year, that was a struggle -- finding just the right books. It's been quite the learning experience!

Thank you everyone for you good wishes, they are so appreciated. I rcvd. quite a few via email too. It really encourages the kids.

This is so cool as my dh and I used to coach (and dh was head) of a team at a parochial school in NC. We went to Nationals once in Michigan and that was soooooo cool.

SO is a great activity and I'm so happy to see a homeschool team do so well -- congrats to one and all!

Congrats, Maureen! There is a home school team in Washington state that competes at the national level. Good luck at State! The school at which I am an assitant coach has regionals tomorrow at GVSU.

We won third place at Region 12 yesterday. Our kids a a rough day in some events and were unable to take any first place medals, but the overall score still came out well enough. Now I will know who CSI is when I see them in East Lansing! Good Luck!

Thank you and Congratulations!

It's cool to see another homeschool team out there. Congrats! Our homeschool team has done fairly well to. We have managed state champs every year since 2004 (except 1 that we got 2nd at). We actually placed homeschoolers on the board at nationals, when we got 4th overall. You might of heard of ExCEL homeschoolers. That's us. Hope you do good this year to.

"Thank you and Congratulations!"