Beatitudes for the March for Life 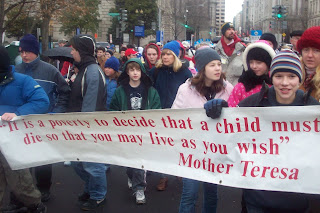 Charles, 14, has taken a different perspective of the March. He ties it all together with Scripture. I thought Sunday the perfect day to share Charles Beatitudes for Marchers:

As I reflected on my experiences at the March for Life, something hit me. Earlier that day, I was doing religion in school and I was in a section on the Beatitudes. I probably should not have been surprised but I was amazed at how closely they described the March.

Blessed are they who mourn, for they shall be comforted. Everyone, whether they know it or not, knows someone who has had an abortion. It is our job to help them, to comfort them.

Blessed are the meek, for they will inherit the land. Who could possible be more meek than all the babies that have been aborted?

Blessed are they who hunger and thirst for righteousness, for they will be satisfied. One of the many reasons for us going to the March was to show the politicians in Washington D.C. how many people disapprove of the laws legalizing abortions.

Blessed are the merciful, for they will be shown mercy. I really hope that we are merciful.

Blessed are the clean of heart, for they will see God. The aborted babies did not have any sin on their souls so the likely went straight to heaven.

Blessed are the peacemakers, for they will be called children of God. Peace is defined as a mental calm. We cannot have peace until abortion is no more.

Blessed are those who are persecuted for the sake of righteousness, for theirs is the kingdom of heaven. Pro-life supporters are often persecuted because we are doing things outside of “normal.”

If there is one thing I learned from this trip, it’s that pro-lifers have a great sense of humor. On our way back home on Wednesday, after we were all back on the bus and about to leave Steubenville, our bus driver got a call on his cell phone. As it turned out, earlier that day, his sister had had a baby! He looked a little mystified after we had given him three rounds of applause. To provide some explanation, Mrs. Wittmann leaned over and said, “This is a pro-life group. We get excited when this kind of thing happens!”