Being the Voice for Those Who Cannnot Speak 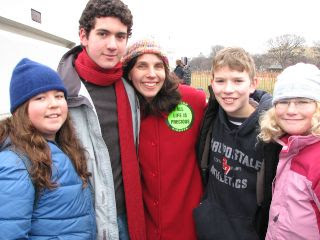 Stephanie, 10-years old, proves that you you don't have to be a grown-up to see the truth, to know right from wrong. Thank you Stephanie:

I was one of 200,000 people who went on the 2008 March For Life and protested against abortion. Abortion doesn't make sense to me because if you were to kill a person who was already born you would go to jail why then should we be allowed and paid to murder unborn children? We marched passed the Supreme Court which uses its power to destroy weak, innocent, and powerless lives. I think it is horrible that we are constantly having to desperately implore our country to stop murdering our generation. I, along with many others, hope that there will be no need to go on the March next year because I hope by that time abortion will be over.

Although there are still many people having abortions today, I think that people are starting to realize just how terrible abortion really is . On the March For Life I was surprised and happy to see just how many young people stood up for life. But the battle is not yet won so please join me and many others in being the voice for those who can not speak.