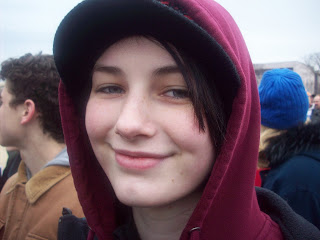 Today's reflection is written by Mary, who turned 16 today. She brings yet another perspective that many of us may not have considered:

The March 4 Life 2008, amazing as ever and as sad. Not only because of all the babies, our next generation being killed by the thousands everyday, but also because of us pro-lifers. When we were marching, I looked around and I could see all kinds of literature scattered on the ground everywhere. I saw people who are pro-life going after other pro-lifers because of different politics. Even our two best known pro-life groups, Right to Life and American Life League, fight among themselves when we should be holding on to each other as tight as possible because each other is the most important thing we've got.

The media overlooks how many people come every year to the March to stand up against abortion, so we will just have to encourage more people to come until they can't deny it any longer.

We also need to do more than just support life when we're in DC or just sending a check every month to an organization. We need to be active in our local pro-life groups in our own cities. I know we have an awesome group in Lansing and there is so much that needs to be done. Like when Jesus was being condemned he could have been saved but the people who believed and cared about him kept silent. But we can't keep silent; silence is our worst enemy, we need to raise our voice above the media and all the negativity of this culture of death, it's hurting our nation so badly but if we can turn it around and turn our country into a culture of life then maybe the rest of the world will see the awesome change and bring God's love and forgiveness back into our homes and lives.

Yes, that's very sad and true. We're bickering among ourselves when we should be united. It's like we jump at every chance we get to argue over the silliest things!