Our Lady of Guadalupe Pray for Us 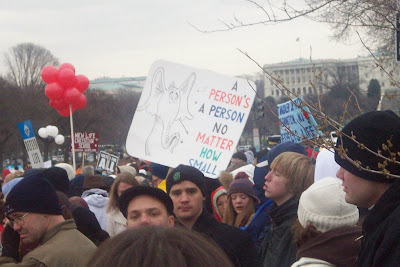 David, all of 13, shares some profound insights with you:

When I went to the March For Life in D.C. I saw banners of Our Lady of Guadalupe. To a lot of people that didn't mean anything but it did to me because I knew that she is the patroness of the unborn. There is a belt around her middle which meant to the Indians that she was pregnant with the baby Jesus.

At the time, the Aztecs thought that the gods wanted human sacrifices. Each day thousands were killed. Even now we are doing the exact same thing to innocent babies. When Our Lady appeared she was stood on a blackened crescent moon symbolizing the defeat of the Aztecs serpent god. Today with the help of our lady we must conquer the devil's power and stop abortion.

On our way to the march we watched Amazing Grace, a movie about the fight to end slavery in England. In our country, in 1868, the Supreme Court ruled that African slaves were not fully human. And today the court has denied that the little unborn child is a person.