Providing a Place to Rest for the Tired 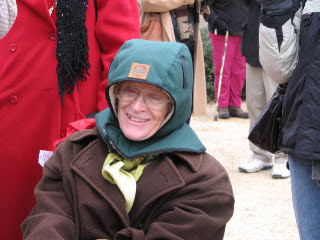 Cecelia is a leader in our local homeschool group. She's one of those woman who just exudes the love of Jesus in all she does. I love this story:

The March for Life was memorable, to say the least. One story I promised Maureen I would pass along is that of an encounter I had with one elderly participant, who borrowed Maureen’s red, folding chair, as she paused to rest her tired body, before the March began.

She was a much older woman than I, with a thin face and a gentle smile. She wore a brown wool coat, pale, yellow scarf and a large, green hat that buttoned under her narrow chin. That she reminded me of the elderly, beggar woman, in Peter Collington’s book, Small Miracles, was due mostly to the fact that she came with hope, like the woman in Collington’s Christmas story, and she found more than she was looking for.

It began when we CHURCH Homeschoolers 4 Life had gathered west of the main stage, on the Mall, huddling together here and there, to listen to the politicians, priests and other notables who were rallying the troops before the actual march took place. After a period of time, I scoured the area a bit to find a better vantage point so the smallest ones among us could get a clearer view of the speakers. After asking Maureen and the other adults whether they wanted to move, we all proceeded about 100 yards closer to the action. In doing so, we left behind Maureen’s red chair, which she needs for her rest. Feeling badly, because I had convinced everyone to move from our original spot, I volunteered to go back and recover the red chair.

When I returned to the group 100 yards from the chair, I came back empty-handed. “I couldn’t do it,” I told Maureen, “I don’t have your chair.” Maureen looked at me and smiled, seemingly not too upset. “It’s still there,” I told her, “but a little, old woman is using it.” In the few minutes that had passed between our group’s move from one spot to the next, the left-behind chair had become a resting place for an old woman, wrinkled and vulnerable herself, who had come to take a stand for life. In doing so, she was the recipient of the charity of Maureen and the mercy of God. “It was meant to be, “ said Maureen, “that I left it there. She needs it more than I do.”

Just a small example of how God provides and will continue to provide for us all.