Here I Am, In My Mother's Womb 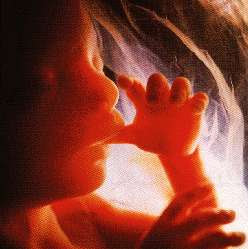 Catherine just turned 15 and has obviously thought deeply about this subject. It was a joy to have her join us in DC!

Here I am, in my mother’s womb, safe and sound… or so I think. It’s been 15 weeks so far; it’s not going to be too long until my mother gets to look into my eyes—until she can hold me, her little baby girl. Wait. What is that suction sound? It’s coming nearer. It can’t be anything dangerous; my mother would never let anything happen to—

And her precious life is brutally snuffed out by a Suction Aspiration abortion, within a matter of seconds, as if she was a choice and not a child—as if she was a parasite and not a gift from God. But many people, who ignore the clear facts of science, believe that’s all an unborn child—or a fetus—is: a mere “problem” consisting of a simple blob of tissue, which can be “solved” by getting an abortion. But the truth is that it’s a living human being, with hands and feet, and with as many rights as anyone else has—or at least with as many rights as anyone should have. You see, if a person is not allowed the simple right to life, then all the other rights are meaningless.

And that is why we march.

The people, like myself, who attend the March for Life in Washington, D.C., on the 22nd of January, are not only fueled by emotion and strong beliefs, but they are also fueled by the daunting facts: that a person is a person, no matter if they’ve just been conceived or if they are on the verge of natural death; that nearly 4,000 unborn babies are murdered daily; and that tens of thousands of post-abortive women are silently suffering because of the barbarous choice the pro-death culture presented them, which they took—probably not knowing about the emotional and physical consequences it could cause them. The list goes on! We, the pro-life people at the March for Life, march for truth and justice—justice for all, born and preborn. We march for all the women who unfortunately were caught in the trap and believed the lies. We march for an end to abortion, an end to the suffering, an end to this barbaric “procedure” in America—a “procedure” that literally tears thousands of lives apart, shedding not only blood but shattering women’s dignity every single day, right in our midst.

Say what you may, but I believe the tide is turning. This year’s March for Life, which I proudly attended with a busload of friends, was awe-inspiring. Even though it was only my 2nd time going to the March for Life, I could tell there were tons more people there than last year, especially young adults and teens. I’m safely guessing there hasn’t ever been so many people at the March for Life. The attitude in America is slowly turning from apathy to concern over the unborn, and about giving women a better choice than the choice of whether to abort … or to abort. People are, more than ever it seems, stepping up for the 1/3 of this generation that would still be with us, working, living, and loving, if it hadn’t been for abortion.

Here’s just one experience from this year’s March for Life that was inspiring: After the March, it had started to rain, and when were just stepping off the Metro to get to the Basilica, we turned our heads to the right and looked up to behold a beautiful sight—a rainbow. It was a gigantic rainbow, with bright, vivid colors, and it started all the way from one side, over the Capitol, and then down to the other side, making it a complete rainbow.

That rainbow was a sign of hope to us—a sign that we’re not doing this on our own, through our own power, but with the help of God through the Holy Spirit. For example, when we’re out there in front of the abortion clinic, praying the rosary, and sometimes in cold weather, it’s not just our own will-power motivating us. God is on our side, pushing us along the way, guiding us.

I will never stop being the instrument of God, thus I will never stop fighting to end this terrible killing of the unborn, the most innocent in the eyes of God. I hope you’re all with me to the end of it.