The Vatican Board Game 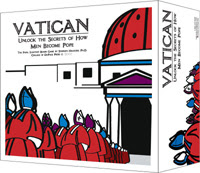 Has anyone ever heard of or played The Vatican. I was thinking of getting it for my hubby for his birthday, but wasn’t sure if it was . . . poorly done.

Can anyone help her out?
Posted by Maureen at 7:26 PM

Since I track very closely the diffusion of awareness of my game, I wanted to comment on the quality of "Vatican." It is as accurate a simulation as 3 years painstaking work could make it. There is a very interesting review by Cathleen Falsani, religion writer for the Sun Times on our website at www.vaticanboardgame.com The review is a record of gameplay with faculty at Chicago Theological.

Below are some direct personal quotes from Prof. Haliczer's blog in order to get a sense of his views regarding the Church -

"Papal Control Over the Appointment of Bishops
On May 4, 2006 the Vatican threatened to excommunicate four bishops of the officially controlled Chinese Patriotic Catholic Association. Two of the bishops had been freshly ordained and the other two had been responsible for the ordination. Vatican spokesman Joaquín Navarro-Valls commented that the ordinations had been “illegitimate because they were not approved by the Vatican.” Like the emperors of the Celestial Kingdom, and the European Catholic monarchies before them however, the communist rulers of China have insisted on regulating religious activities in the interests of social and political stability and to prevent undue foreign influence. The extravagant claims of total control over episcopal appointments made by the contemporary papacy represent a radical departure from the situation as it existed for many centuries in Western Europe while not necessarily providing bishops who can connect with the faithful.

Artificial Birth Control and the Church
The gulf between official church teachings and the attitudes of the laity is probably widest on the issue of artificial birth control. It did not have to be this way. In 1968, most of the world’s faithful anticipated a change in the church’s position on contraception especially given the fact that the papal commission that had been convened to study the matter had reported in favor of change. These hopes were dashed when Paul VI issued the encyclical Humanae Vitae which reiterated previous Vatican pronouncements. The critical reception accorded the encyclical gravely disappointed the aging Pope but it shocked the faithful and many left the church. Even more damaging for papal teaching authority, however is the fact that Humanae Vitae sparked off an internal revolt among bishops, clergy and laity. Given the growing controversy about the church’s attitude toward contraceptive use to prevent the spread of AIDS, now is a good time to re-visit the way the encyclical was written and received and perhaps point to a way that the church can begin to back away from some of its more intransigent positions.


In response, some resources for readers here -

Article - "Why Catholicism Is Not A 'Denomination' and What That Means" by George Weigel
http://www.crisismagazine.com/
november2001/feature6.htm


Given Prof. Haliczer's posted views, I personally would not be interested in this boardgame.