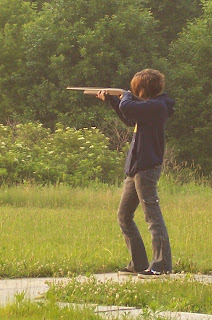 Both Teen Son and Teen Daughter One made the Michigan 4-H shooting sports team and are going to the national competition!!!
When I learned this news yesterday, I was so excited and happy for them. This morning I woke up and the reality hit me. I have to do some major fundraising between now and June, and somehow get these kids to South Dakota for competition. And, along the way, there will be LOTS of practice and LOTS of costly ammo. What was I thinking when I encouraged these kids to go for the gold? Why can't I have normal underachieving children?
Okay, enough whining. Something has to give here. Teen Son and Teen Daughter One are working like crazy preparing for the state Science Olympiad competition which falls on the same day as my speaking engagement in Milwaukee. If they win that and go to the Science Olympiad national competition, it's the same day as my speaking engagement in Dayton. And then the national 4-H shoot is just a couple of weeks after my speaking gig in Kansas City. Between my travel and their achievements, it's too much. I think next year, speaking engagements will have to go.
Posted by Maureen at 10:35 AM

Congratulations on the kids' achievements and another speaking engagement for you! Wow!

Sympathy on being overwhelmed. Yikes!

Encouragement for it all falling peacefully into place. Prayers for you all!

Wow - that is exciting - good luck with working out all the details! Does that mean we'll be seeing you in S.D.?

You guys are going to be BUSY! ;) Good luck with all of that. It's cool that they'll be able to do all of that stuff. Hopefully you guys will be able to raise enough money for both of them to go.