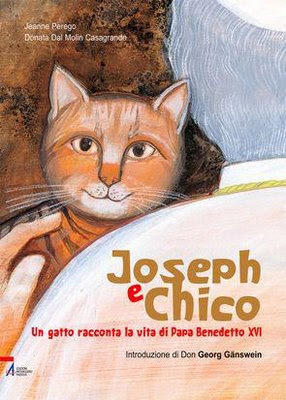 With the Pope's U.S. visit there is a heightened awareness of all things Benedict and everything Catholic. Now is the time to really get on the ball and make those purchasing requests to your library. Also email them and suggest a special display to commemorate this historic visit.

To read past library recommendations, or to join the email list, visit: Pope Saint Nicholas V.
Check to see if this title is already in your library's catalog. If it is, put a hold on it and check it out. If not, fill out a patron request form right away. This can usually be done online at your library's website.

Book description from the publisher:

In this beautifully illustrated book for children, Chico the cat describes the life of his "best friend", Pope Benedict, in this authorised biography of the Pope for young people approved by the Vatican.

"Dear Children, here you will find a biography that is different than others because it is told by a cat and it is not every day a cat can consider the Holy Father his friend and sit down to write his life story," the Pope's personal secretary, Monsignor Georg Ganswein, says in the foreword.

The Pope is known for his fondness of animals, especially cats, and Joseph and Chico is narrated by Chico, a real cat who took up with the Pope in his native Germany long before he became the Pope. Chico tells the story of the life of "my best friend" from his birth in Germany in 1927, through his days as a young man, priest, bishop and cardinal.

With a colorful and sometimes amusing language, the author makes this funny cat tell us about the life of the young Joseph all the way up to his election as Pontiff on April 19, 2005. It recounts the Nazi era in Germany when the Pope was a teenager, calling the war years "one of the most dramatic and shameful times in the history of man". Later when he became Cardinal Ratzinger, Chico recounts how each time when the Cardinal returned to Germany from Rome for a vacation, the cat would run into his house and sit on his lap as he played the piano.

The lavish color illustrations throughout make this a wonderful gift book and a cherished keepsake for people of all ages!