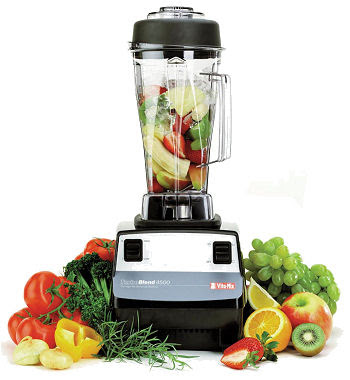 Before we moved, Rob was an extreme commuter. Three hours of driving each day. It was a killer. For all of us.
My girlfriends would comment on my pending sainthood because I would get up at 5:30 every morning to make Rob a smoothie for the road and to kiss him goodbye. But, really, it was all selfishness on my part. If I wanted to see my husband, it wasn't going to happen if I snoozed through the alarm clock. I want a healthy marriage and seeing him off each morning helped in what was a very strained situation. I also want a healthy husband which explains the smoothie. Extreme commuters have to grab food where and when they can and it was worth the extra few minutes to whirl the Vita-Mix as well as pack a healthy lunch for him.
Now that we live closer to the office, Rob and I get to sleep in an extra hour. But I still make the smoothie. Though variety is the spice of life and I do alter the recipe a little here and there, here is the basic recipe for Rob's favorite smoothie:

Peel and breakup your banana and put in the blender. Follow with the
strawberries and the blueberries. Then pour enough vanilla soy milk to cover the top. Blend on high. If you like it thin, keep adding the soy milk through the lid until you reach the consistancy you like.

And that's it. Makes a lot -- enough for you and for your husband.
I recommend a really good blender. Over the years, I've burned out my share of blenders. I finally invested in a Vita-Mix. That thing can hold up to even the most frozen of strawberries. And it comes with a nifty tool to push down the frozen stuff to make sure it gets all blended. You could also use a spatula -- just make sure to do it through the lid so you don't get splattered.
Sometimes I throw in a scoop of powdered Benefiber. You can also put in powdered dietary supplements. I once tried putting Rob's vitamin pills in there, but it didn't work. It was a chunky instead of a smoothie. I'll also soup it up now and then with pomegranate or tart cherry juice concentrate.
You can also try different fruits. Peaches are good. Sometimes I throw in raspberries or blackberries but Rob isn't too fond of all the seeds. If you use fresh fruit instead of frozen, then you need to add ice, otherwise it'll be too thin. My friend Linda says watermelon is good and if you leave in the seeds you get extra fiber. That Linda cracks me up.
Give a smoothie a try and enjoy!
Posted by Maureen at 9:25 AM

Labels: In the Kitchen

Maureen -- I am FARRRR from Sainthood, but I too get up with dh as he loves to be at school before 6:30 to get things prepped so 5:00 is also when the alarm goes off! Ain't love grand?

I love this smoothie recipe ... and wish I could afford the VitaMix!

Mary, I got mine on e-bay. Look around for a good price. I use mine for grinding wheat too. In the long run, it saves me money. I was buying cheap blenders every year.

For grinding wheat, I bought a separate container. It was around $100. But a good wheat grinder costs 3 or 4 times that much.

I use one of those cheapo Magic Bullets, which I bought at Target. It's held up for two years and works well for smoothies and milkshakes.