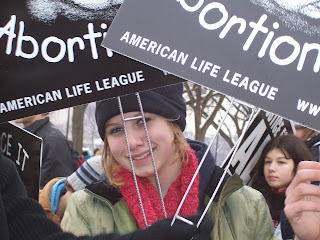 The March for Life was held this week, on Monday, January 22nd. I was privileged enough to be able to experience this powerful eye-opener with friends and total strangers, who were there for the same reason as me.

Trying my best to listen to the speakers, and at the same time, holding my coat as close to me as possible to stay warm, I took the chance to look at all the banners people were holding up—the names of their church, state, or school/university. I was amazed to see how many people from around the USA had come to support such a noble cause, and in January of all times. Even though, I thought at the time, I was sure all the people around me, particularly all the teenagers and young adults, had different opinions on a lot of subjects that I have different views on, just looking around me gave me such a happiness to realize that my friends and I were not the only teenagers who had the same strong opinions about the murder of an innocent baby before it comes out of its mother’s womb.

Not only is the March for Life an event where people can shout out to the world that abortion is evil, but also an event where all pro-lifers can come to grips about how many other people are disgusted about the fact that around 4,000 times a day, an innocent human life is ended. I think we all know that we are not alone in this fight but, in this time and age, it is hard to grasp it when the media is telling us that we are just some small, obnoxious group that has no right to say that a mother doesn’t have a right to abort her unwanted child.

When the speakers were done with their speeches, and whether people were ready for it or not, we all started marching. Holding up my pro-life sign, I took a brief second to look around me, and it was just incredible to see how many people were in line for the March. I couldn’t take it all in too long, fearing I might get run over, but it was enough to get me pumped to walk in the cold for as long as it took.

During the March, I looked over and my jaw dropped to see three people on the side of the road, holding a sign saying that they were from France. There was a sentence in French, and then another one that, I am assuming, was the French sentence translated into English. Then it hit me: Americans aren’t the only ones who are under this attack. I kept on looking behind me and glancing at them with a huge smile, amazed that they had come, until I realized that there was a big possibility I might trip over someone in front of me.

What I learned the most, it seems, is that there is still hope. The people at the March were just a small percentage of pro-lifers. Think about this: The March is in January, on a Monday, in Washington, D.C.

I am just lucky enough to be homeschooled and have friends who have the most awesome mother, and friends who have the most awesome father. I really want to thank these awesome parents: Mrs. Wittmann and Mr. Stenske. They dedicated their time to take a bunch of rambunctious, crazy teenagers all the way from Michigan to D.C., including all the stops in-between. Through all the planning, commotion, sickness, wrong turns, loud music, lack of sleep, and whims, they still stuck with us, and didn’t dump us on the side of the road in some abandoned town. This is why I really can’t say that this fight is only for the next generation—my generation—, because people like Mrs. Wittmann and Mr. Stenske are there to push us along the way, or literally speaking, drive us there. Thank you Mrs. Wittmann and Mr. Stenske!

Also thank you to: Mr. Aquilina, for finding us a place to sleep; to St. Sebastian’s Church for letting fourteen teenagers and two adults stay in their building; to our friends who provided the bus, and for having such a low price to ride on it; to the person in the dark van, whomever he was, who stopped and took time to ask if we were lost, and to direct us to the church’s building; to the people at Franciscan University in Steubenville, who were so kind and helpful to us. And finally, thank you to all my friends who came with me, for sticking with me, even when I was tired and delirious.

I also want to thank my parents for letting me go in the first place. It was truly an awesome experience, and I am proud to say that, yes, I am pro-life, and I always will be.

Great piece of writing, Catherine. We'll see you next year!

Wow! Catherine is wise beyond her years.

I especially liked these remarks:

I think we all know that we are not alone in this fight but, in this time and age, it is hard to grasp it when the media is telling us that we are just some small, obnoxious group that has no right to say that a mother doesn’t have a right to abort her unwanted child.

Working as a pro-life youth outreach coordinator, I never cease to be amazed at the zeal of today's kids, teens, and college students.

I am sure it was an absolutely amazing opportunity ... so glad that you could help provide this for these kids.

I was very impressed with her writing ... very well spoken.

Good work, Catherine, it wure was great to read your report, thanks for sharing.