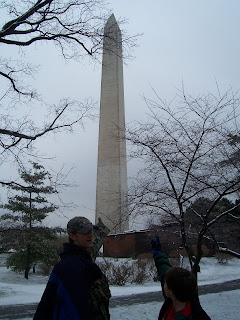 Here's Jake's report on the March for Life trip. Jake is 16.

It was a long ride down to Pittsburgh in two vans but we made it, all in one piece may I add. The roads were very wet, icy, and slippery. We stayed in a church office/house for the night at St. Sebastian’s. Pizza was picked up, card games started, and music blasting. It wasn't out of control, the parents kept us from disturbing the dead. That night, none of the guys got much sleep due to two funny little people dancing somewhere upstairs all night. The next morning we woke up at four and got ready for a long bus ride and a March For Life. We were the first group on the bus so we all got to sit together in the back.

Stopping for breakfast at McDonald’s, I went on a mission to find Chapstick with my friend Austin. A nearby gas station held the fruits of our search. Victorious in our adventure we got back on the bus to go on a real adventure. The bus arrived in DC and we tromped out into the cold air staring at the Washington Monument. Pictures were taken and off we went in a search for the March.

“What a group of crazies” is what I thought when I heard the speaker/yeller yelling to a crowd of pro-lifers about how abortion was evil. Well, not all of the speakers yelled to us but there was enough of 'em. After the speakers were done doing what they did best, we set off to inspire people to choose life and to stop abortion.

The huge masses of people started moving, slowly. The March wasn't too long but long enough to make a difference. It was an amazing experience to see how many people stood for Life. We left the March at the end to get a ride on the metro to the Basilica. The place was huge. That’s all I know about it, because when we got in I sat down. I was so tired. We went downstairs to the crypt and participated in Mass, then left to go back to Pittsburgh. The bus stopped once for dinner and once in Pittsburgh for the end of the day. Not many card games were played that night, we were all too tired.

The next day we left around nine, ate breakfast, and on the way home we visited Steuby! We ate lunch there, visited the bookstore, and celebrated mass again.

The whole trip was amazing. It was really cool to see all the people standing up for life. I would definitely go again to fight the battle for life and pray for aborted babies.