Christian Challenges You to March 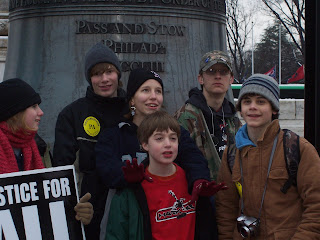 This is from Christian, age 17. There is great hope in today's youth:

The ideology of the secular world is that abortions should be safe and few. Few, not because it is evil. On the contrary, they see it as a benefit to society and a gift to women. It is because they expect other means against procreation will be perfected.

Abortions are not few; they are not safe; furthermore, they are not justifiable. The facts are: abortion is brutal, it is messy, and it is painful both physically and emotionally, so much so it is traumatic. It violently kills millions of babies all against their own will (after all, what innocent little child would ever choose to die?) and kills millions of mothers inside. Abortion is murder. Abortion is cruel.

Many people understand this, and are angered by the sick ideology of our secular world. That is why on January 22nd of every year, well over 100,000 people gather at our nation’s capital for the March for Life. Every year these people gather together to give a voice to the millions of innocent victims who have none. These people, mostly young people, pray, protest, and march so that this modern day holocaust may someday end.

I wanted to be a part of this demonstration so I went and I marched; I want to see an end to this age of darkness, an end to where violence on such a monstrous scale is embraced by our government and integrated into our very society. I challenge every person who is sickened by the heinous sin of abortion to do the same.

Excerpt from Webster’s Seventh New Collegiate
Dictionary (1967):
Abortion: 1: The expulsion of a nonviable fetus: a: spontaneous expulsion of a human fetus during the first 12 weeks of gestation. b: illegal abortion. 2: MONSTROSITY. (emphasis in original)

Christian is in the back row on your left.
Posted by Maureen at 5:00 PM