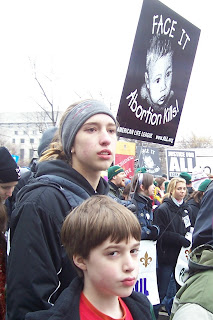 This is from Rebecca, age 17. I don't know if it's just me, but I went through the Kleenex reading this:

There is still hope. After participating four days ago in the Washington D.C. March for Life, I clearly saw that there is still hope. Hope for the innocent lives of the unborn children living in their mother's womb, hope that someday Roe will be overturned and the massacre of my generation will finally come to a close.

This was the first time I participated in the annual march through the streets of our nation's capital. I had no idea what it would be like or what to expect. I had my share of doubts. In fact, I almost did not go at all. Yes, I almost turned down the opportunity to take this trip, to stand up for what I believe in, to give a voice to those who have none, and to have a great time with close friends. Now sitting here typing this, I ask myself; "What on earth was I thinking?" For that I simply don't have an answer, this trip was something I will never forget, it is something I was so blessed to have had the ability to go to, to march in, and be apart of. It strengthened my beliefs, my resolve, and my hope that there are still good people in this world who care enough about our innocent to take the energy and the time out of their chaotic lives and defend them. It was truly an unforgettable experience.

When we arrived in D.C. late Monday morning, I was thrilled to be in the city, that in itself was "really, really cool." It is such a beautiful city. When I got off the bus and started walking around is when I began to notice the other people. As my group trudged through town, you could see more and more people. And not just the typical D.C. citizens I'd seen before, but other pro life people! Not only those of the older and wiser crowd, but other teenagers and young adults just like me! Young people who were there for the same reasons I was, to defend life and keep it sacred. Even cooler.

Just listening to all the speakers before the march taught me more about the reasons why I am pro-life, and reminded me again why the evil of abortion must end. One speaker in particular caught my attention. He spoke about how abortion is affecting different races and basically becoming another form of genocide. This is an evil I never realized. Standing out in the cold and wet with numb toes and pink ears was definitely worth it to hear what I did.

After the speeches had finally come to a close, we started the actual march in the streets. It is amazing to me to think they close down these very busy streets in our nation's capital just for us to march. That in itself says quite a bit. It sends the message that we are not just some little group of traditional religious parrots, but that we are a solid voice that will not be ignored, nor be pushed aside. As I was walking with my banner in hand, it was most definitely a very "solid" sea of people that went as far as my eyes could see. Banners everywhere, huge billboards graphically depicting just what happens to that " blob of tissue" whom remarkably resembles a human person, after a being torn from his mother's womb. People everywhere, so many people that, just to keep track of and stay with my small group of sixteen was a challenge. But it was a welcome challenge, to see so many people of so many diverse cultures all coming together for this one march, to stand up for exactly the same reason as myself, it was mind blowing.

One thing I had been wondering about before we started the march was whether we would see any "pro-choice" protesters. I thought surely we would see some. I was curious to see how vocal and how many that would turn out. I have to say I was pleasantly surprised to see only one woman with one sign showing her disapproval. Only one. Yes, surely there were more who I did not see, but if there are so many people that are willing to fight for their precious right to choose, then where were they? Why did I only see one person? The lack of opposing people I saw, or didn't see, at this march spoke volumes to me.

Why does it seem as if more and more the only ones who truly want a woman to have the "right" to an abortion are the ones whose pockets will be filled after they perform the procedure? Is that the voice of our young women? Why is it that pregnant women are often pressured into considering and having abortions because they are told it is the their only real option? Their only true or humane "choice"? In my opinion, there are not nearly as many people who love their right to choose as much as some large abortion industries do, and would like us to believe. Sometimes it's overwhelmingly depressing, to think we have lost so many already, and how on earth can we hope to overcome this great evil that makes so much money every year?

But after participating in this March for Life, my hope is renewed that we can defeat this monster that has stolen 1/3 of my generation, killed my friends and other amazing people that I will now never know. But we will not stand for it forever. Seeing all the young people there, just like me, made me realize that, like my brother said, someday, soon and very soon; "There won't be a next year."

I would like to thank the people who made this hope-inspiring trip possible for me. First thank you to every single person who I will never know of whom have given all of us this opportunity. Thank you to Dr. Donnelly for all he did for me that I am sure I'm not even fully aware of. Thank you to Mr. Aquilina, for all he did for our group, including finding us a great place to sleep. Thank you to the St. Sebastian's parish who allowed us to use their building. Thanks to our "tour guide" Michael, for sticking with us all day and even the night before. A special thank you to Mr. Stenske and Mrs. Wittmann, who gave so much to all of us. Whether it was driving a full sized van through snow and ice to get us there, dealing with our loud music, or just our crazy teenage terror in general, I thank you both for all you sacrificed to get us there and back again. Especially Mrs. Wittmann, who is such an extraordinary example of all a homeschooling mother can be, and if it were not for her and and her children, I wouldn't have gone.

Also thank you to my own parents for allowing me to go on this trip, and thank you again to my mother for choosing to give me life.