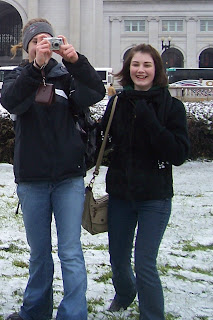 The March for Life was on January 22nd and an awesome way to show the world that people still care about the unborn.

We got to Washington, DC around 11 and headed right to where the speakers were talking. Even though we had to listen to them in the frigid cold for an hour or two they still said some pretty inspiring things, that is if you listened hard enough and stopped looking at all the people around you and reading the signs.

When we finally got to march we were only able to take baby steps because of the crowd but eventually we spread out and really got to March for Life. Luckily, no one got separated in the sea of people but that was mostly because of the ingenious buddy system and the banners we were holding. We got to finish the March off with going to Mass in the crypt of the Basilica.

It all turned out to be an awesome experience and sharing it with friends made it even better. And even though I hope there will be no need for a next year, I sure hope I'll be able to march for something I truly believe in. LIFE!

Glad to hear you and the youth had a wonderful experience at the march in DC :)

I noticed on another blog that you said you are from Michigan. Are you in Southern Michigan by any chance?

I ask because I am expanding the Northern Indiana Chapter of Survivors into Southern Michigan.

You can e-mail me at QUINNOLINGER@VERIZON.NET

Have a blessed weekend!