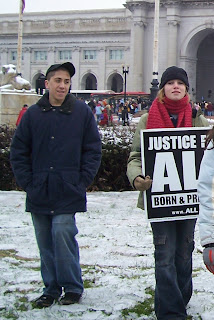 This is from Michael, age 17. Again, another guy who gets right to the point and inspires. Michael has been going to the March for ten years now (since he was seven - wow!) and was very helpful showing us how to get around DC.

This year I went on the March for Life in Washington, DC, and it was amazing!

I think my favorite part was seeing the diversity of the people who were there: both men and women, of all ages and races and religions, from all over the United States! It was really amazing to see all these people and know that they all came to Washington, DC on a Monday morning in January to protest the killing of more than a million babies every year.

And what's even more amazing is that the thousands of people who were there were just a tiny number of the millions of pro-life Americans out there - it really gives you hope that, with the support of so many people, our abortion laws will change for the better.

The March for Life was great and I hope to come back next year, but hopefully instead of a protest, this time it'll be to celebrate the overturning of Roe vs. Wade!

These March for Life posts have been great. I linked to you from my blog to spread the goodness. God bless.

You know, these kids simply blow me away. Oh, how I wish I had been so wise at their tender ages.

God bless you Mike and your vocation!!!!

You're right about diversity Michael. I saw signs:
Democrats for Life
Feminists for Life

Someone told me they saw a sign:
Gays for Life

Hey, I may not agree with these folks on a lot of issues, but sure am glad to see them coming over to the pro-life community!