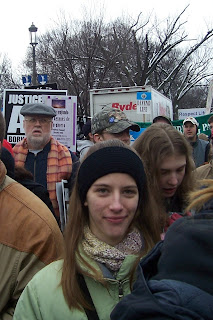 We had three Rebekah's on the trip to DC, so we had to number them to keep down the confusion. Here is the lovely Rebekah #2, age 17:

I went with a group of thirteen teenagers and two adult chaperones. We drove to Pittsburgh, PA to stay the night at the office building of a church called St. Sebastian. The priest there was very hospitable and on fire for life. Some of my friends stayed up the entire night since they decided that going to bed at 11:00p.m. and waking up at 4:00 a.m. just wasn’t worth the five hours of sleep. *chuckle* The rest of us smart people tried to get some sleep.

The next morning, we left bleary eyed at 5:00 a.m., to get to the bus early with Mr. Aquilina leading the way. After a six-hour drive, we arrived in Washington D.C. We walked around for awhile and finally found the way we were supposed to go. After that it was easy to tell the right way because crowds were massing together. We reached the mall in front of the capitol as they were singing the National Anthem. There we listened to several speakers, including the President, via the telephone. It was awesome and encouraging to hear people tell of their love for life and what they were doing to fight for it.

While we waited for the march to start, we munched on munchies and tried to keep warm. The people in front finally started to march and everyone in our group grabbed their assigned “buddy” so as to not get separated in the mass of thousands. As I walked carrying my sign, I saw the Dominican brothers, college students, parishioners with their families and heard people praying the Hail Mary over and over again. I looked up and saw people watching us from windows and wondered what they were thinking. Did they think we were crazy? Or were they just like us?

After the march, we took a ride on the Metro to the National Basilica Shrine of the Immaculate Conception. There are not words to describe how wonderful it is. When I walked in, I wanted to cry because it was like a piece of heaven; the way all churches should be. The crypt, where we attended Mass, was no less beautiful than the main church. We finally left the basilica and made our way to the bus, which would take us back to Pittsburgh resulting in another late night.

All in all, besides the lack of sleep, which I am now catching up on, it was a life changing experience. It strengthened my resolve as a pro-lifer and my desire to do more to help the pro-life movement; but most of all, my love for God was increased through my visit to the shrine and the realization that God has a special plan for my life.