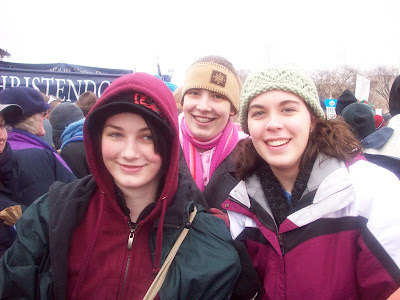 Ginny is 17-years old and an inspiring young woman:

One-third of my generation is gone. Dead. Killed. Murdered. There were 40 teenagers in our group—that means that we were missing 20. Twenty teenagers who might have been pro-life if they had only been given the chance at life, themselves. This is one thing that I heard on the March that has stuck with me—that as we stood there on the Capitol Mall, there were spaces in-between us that should have been filled. Filled with young adults, teenagers, and little children who were thoughtlessly martyred in the name of “choice.”

And yet there is hope. Those 40 teenagers who were given a chance at life as well as the thousands of other teens and young adults who attended the March for Life have a passion for the cause of life. I heard one mother on the trip mention that maybe once the 60’s generation is out of power, my generation will be able to step up and finally abolish Roe v. Wade. I believe it. There were so many of us that day in Washington. We are not a tiny fringe group, we are a movement—and we are strong. The teens I spent time with during our trip are all willing and ready to fight, hard, to once and for all secure the freedom to life. We are chomping at the bit to get our hands on the reins of this country and steer it in the right direction.

I can’t wait for the day when, instead of the usual March against Roe v. Wade, we have a rally celebrating its overthrow. What rejoicing will there be on that day in houses of worship all across this nation! I am so ready for that day. But until then, I think the Rock for Life T-shirt says it best, “You will not silence my message. You will not mock my God. You will stop killing my generation.”