Ron Paul at the March for Life 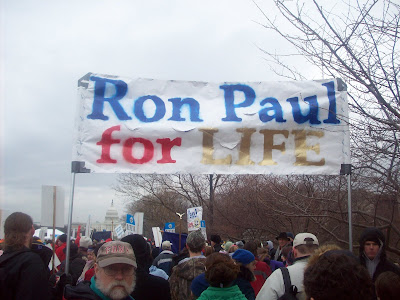 One would think that all of the "pro-life" presidential candidates would be out in force this year at the March for Life. Wrong.
The only candidate I saw there was Ron Paul. He was one of the keynote speakers. His grass roots supporters were everywhere in the crowd. Everywhere!
No sign of Huckabee, McCain, or Romney. None. Not even a bumper sticker. Makes me glad I voted for Ron Paul in the Michigan primary.
As Paul, Just a Regular Guy said:

If I were supporting a different candidate than Congressman Paul, my heart would be aching today to know that McCain wasn't there, Romney wasn't there, Huckabee wasn't there. President Bush, once again, skipped the march, and phoned in his greetings. Ron Paul was there.

As a side note. I had a lot of friends tell me that they liked Ron Paul the best of all the Republican candidates in the primary, but didn't vote for him because it was unlikely he could win. That's flawed thinking, in my opinion. He can win, if people vote for the best candidate instead of the "most likely to win." Paul is not the best speaker or most charismatic to be sure, but he does get to the point and is clear on his political positions.
Okay, I'll get off my soapbox now.
Posted by Maureen at 10:41 AM

I am also disappointed in our President. After all these years of pre-recorded messages, in this, his lame duck year in office, he could at least have got himself down there in person.