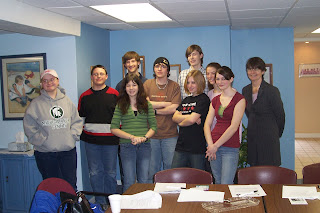 As my regular readers already know, another parent and I took two vans full of teenagers to the March for Life last year. Many fruits were born of that trip. Almost immediately upon arriving home, the teens began a club -- Homeschoolers4Life. They pray monthly in front of an abortion clinic, commit to pray daily for their spiritually-adopted unborn baby, have started a dresser ministry, and much more.

They also decided to take a busload of teens this year to the March for Life. I'm now heading up a bus of 52 teens and parents to Washington, DC. (Yes, I am crazy.)

In the beginning planning stages, I asked the teen members of Homeschoolers4Life how they wanted the funds distributed. If they worked hard fundraising, shouldn't the money be targeted to a personal account, making their trip cheaper. Or should the money be split among everyone who wanted to come on the trip? We were filling a bus with more than 50 people and we only had a core group of 10 to 15 teens working at fundraising.

The vote was unanimous. They wanted all the money they raised to be split evenly among all the travelers, even though most would not have taken part in the fundraising. They did not even hesitate in that decision -- they were adamant about making this trip affordable and doable for everyone. I was blown away by their generosity. But that was only the beginning.

A family stepped forward and gave us $500 for the bus. The bus company gave us a nice discount. Several families offered to pay the way of three teenagers who couldn't afford to go otherwise. A dear friend went to work to find us lodging and managed to get us a healthy discount for a lovely retreat center. Then, an 18-year-old young man gave up his Christmas bonus to pay for the remaining amount due the retreat center -- enough money to buy himself all kinds of fun electronic teen gadgets. (I cried my eyes out upon learning that one!)

Parents stepped forward and offered babysitting for those of us who will be leaving young children behind, volunteered to make yummy treats for the bus ride, to be our prayer warriors, and more.

Every step of the way, we saw God's hand blessing this trip. Of course, one can't help but wonder why. And there are a million reasons why. But, I think it comes down to how this all started -- a bunch of teenagers who did not hesitate sharing their resources so that many may make this trip. A trip that should cost $200 per person, but they managed to get down to $40. But more importantly, a trip to honor God, to honor Life, and to stand up for those who cannot standup for themselves.
Posted by Maureen at 1:32 PM

You should look into Students for Life of America, a national college pro-life conference on Sunday before the March for Life. studentsforlife.org

Wow - that is awesome! My daughter is going to the March for Life this year, but not because of any effort on my part - her grandparents are taking her and several cousins for the first time. She's really excited about it!